My friends and I met at EDWINS on Shaker Square for dinner last week. We took advantage of the amazing weather and chose to sit outside on their patio. It was 65 degrees and sunny with a light breeze. The night was practically perfect.

When we sat down we were asked if we wanted still or sparkling water, and they kept our glasses topped off the whole night. I enjoyed my Hemingway Daiquiri, but was less enamored with the French 75, which was made with gin instead of champagne as I am used to. The service was exceptional from start to finish. The staff is trained here for six months, three months front of house and three months back of house. EDWINS just does a great job preparing them for the food service industry. We are lucky to have it here. A little birdie told us September’s Dinner in the Dark will be at EDWINS, and they will be inviting some of their graduates to come cook for us. Nancy said the last time they did it it was exceptional.

I had decided to treat myself to Le Burger, which is prepared tableside, but was waivering between the burger and the steak. Our server insisted Le Burger was the right choice, no matter what. Le Burger features hand ground beef, bacon, mushrooms, fried garlic and sauce Diane. Not just any beef, but filet ground right at the table with herbs then added in. Our tableside preparer had trouble with the grinder (some part wasn’t moving properly), but once it was fixed it worked perfectly. 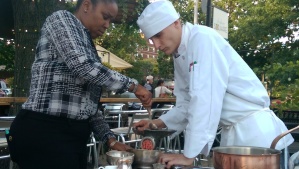 The formed burger patty was then taken inside to grill while the preparer makes the sauce Diane. He started with goose fat, then added butter, bacon, mushrooms, shallots, Worcestershire sauce, dijon mustard and garlic. He then added brandy and flambéed it up. It was quite a sight to see.

Then he added cream to the sauce and let it thicken until the plated patties were brought back out to be finished. The patties were generously topped with the sauce and arugula and served with a side of goose fat fried potatoes, which were absolutely luscious.

The burger was tender and cooked to my specifications. My friend Nancy also thoroughly enjoyed her burger, while her husband loved the steak and asparagus. 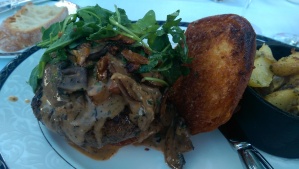 I also ordered a side of the Broccolini Polonaise to get some veggies in. The broccolini were perfectly cooked and served with brown butter, breadcrumbs and grated hard-boiled egg. I thoroughly enjoyed it that night as well as with the other half of my burger the next day.

I continued the tableside theme by ordering cherries jubilee. I had never had cherries jubilee and had always wanted to try it. They used to prepare bananas foster tableside, but now they serve it as a french toast dessert. I had a different preparer for this course. The melted butter, cherries and sugar were heated in the skillet along with some lemon juice. Once the cherries softened and reduced down a bit he added some alcohol (if I remember correctly rum and Grand Marnier) and flambéed it up.

It was served with some housemade vanilla ice cream. The cherry sauce had thickened and hardened a bit, so I had some bites that were a toffee-like consistency and some that were creamy. The deep red of the cherries looks amazing against the white of the vanilla ice cream, and the flavor is even more amazing than how it looks.

I enjoyed it a lot, but the real star for me was the Creme Brulee. My friend let me have a couple bites of hers, and it was just about the best I’ve ever had. The sugar was thin and flaky, and the eggy custard was amazingly delicious. I will be going back for that again soon!

Sitting outside on the patio and enjoying the tableside service was truly amazing, but they also offer the service inside all year round. The preparers both agreed it was a little trickier outside than inside, but the flames did not go out so I consider it a success. 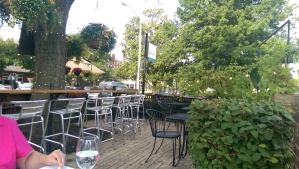 Apart from one friend who didn’t like her eggplant (but enjoyed her Chocolate Pyramid dessert and was pleased with how the staff handled her not liking the eggplant) we all went home very happy with our experience at EDWINS.

I just read on Twitter that Viking is closing. I called Viking to confirm because I had hoped it was an April Fool’s joke. Alas, it is not. It isn’t because their classes were not well attended, because most of the classes for April and into May were already sold out. My heart is breaking for the employees there. The classes were always delicious and enjoyable, and the recipes I have collected from their classes over the years are some of my favorites. We were so lucky to have such an excellent cooking school in Cleveland. This is truly a sad day. The employee on the phone informed me that the Going out of Business sale starts on Friday, so be sure to check it out. If you are signed up for any classes after April you will be receiving an e-mail to let you know, and I would assume they will be refunding your money. 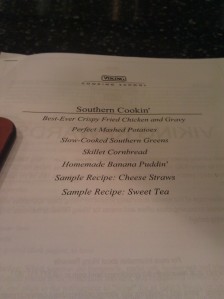 I’m a sucker for banana pudding and fried chicken, so signing up for the Southern Cookin’ class at Viking Cooking School in Lyndhurst was a no-brainer for me. Viking Cooking School is located in the Viking Store at Legacy Village, and they offer a variety of fun hands-on cooking classes and chef demonstrations. I have attended 9 hands-on classes there so far, my favorite being the Steak, Roast and Chop class and my least favorite being the Vietnamese Cooking class. I am on a cooking class kick at the moment, so I have attended cooking classes at both The Chubby Cook and Viking recently. This led to some confusion on my part when I showed up for the Southern Cooking class at The Chubby Cook. I realized my mistake when they started passing around edamame, and I apologized and ran out of there to drive to Viking. Luckily they are close to each other,

so I was only five minutes late. I had missed the introductions, but quickly grabbed a seat next to my friend A., put on my apron, grabbed a sweet tea and took a deep breath (not necessarily in that order).

Viking always puts out a snack to nibble on while we cook, and the “sample recipe” this time was cheese straws. Not being a big fan of cheese straws I ate one and then concentrated on the recipes at hand. We started out making banana pudding with vanilla wafers, because it needed to set in the refrigerator for a while (at least 1 hour, but preferably up to 4). 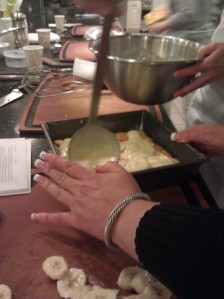 We whisked the ingredients together, added egg yolks (carefully tempering them into the heated mix), and made a custard. We especially enjoyed pushing in the bananas and vanilla wafers into the serving dish.

Next up were the slow-cooked collard greens, because they needed to cook on the stove for at least 20 to 30 minutes. We cooked the bacon and onions (in A.’s case, because she is Jewish, she cooked the onions in a separate sauce pot and made her very own bacon-free collard greens),

washed and chopped the greens, added them to the bacon and onion, added water and let them cook down until tender while we focused on the mashed potatoes and fried chicken.

The mashed potatoes were fairly straight-forward. We cooked and riced the potatoes and mashed them with warm half and half and butter, adding salt and pepper. The interesting technique we learned is that you can make them ahead, wrap them tightly with plastic wrap and keep them in a 200° oven or warming drawer for up to 4 hours. They were still warm once they were served with the gravy later.

I had most anticipated learning how to fry chicken in a Dutch oven. I recently inherited my grandmother’s, so I was anxious to learn how to use it properly. The chicken had been brined in a buttermilk mixture overnight, so all we had to do was heat up the oil in the Dutch oven (checking the temperature constantly with a candy thermometer), coat the chicken in a bag of flour, cornstarch, baking powder, cayenne, paprika and black pepper, and fry it up two pieces at a time. The toughest part about frying the chicken was maintaining a steady heat, because the heat drops once you add the chicken. I was the fry master, learning how to scoop out the little bits that broke loose while frying using a fine-meshed sieve to use later for the gravy. I only burned myself once when A. accidentally singed me with the sieve. The chicken was then put into the oven to finish cooking.

Our instructor Brie then showed us how to make a quick skillet cornbread and sent us out into the store while she and her assistant whipped up some gravy using some leftover oil and crispy chicken bits, cleaned up, and prepped and set the table. Class attendees get 10% off on most items in the store during classes. I used my discount to buy a sieve, a good Viking Santoku knife and a scone pan.

We then came back into the classroom and took our seats for a delicious meal and a glass or two of wine. I wanted a chicken breast, so I had to wait a bit until it wasn’t raw on the inside. I ended up taking another one home for the next day. The food was delicious. There is something about enjoying the fruits of your labor over a glass of wine with friends. No one went home hungry, and I couldn’t wait to go home and try making the banana pudding on my own. It was a very enjoyable and delicious evening.