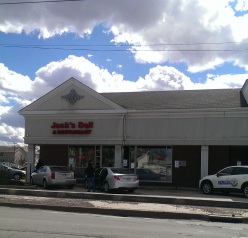 Since I recently wrote about Corky & Lenny’s I thought it would be only fair to write about the other Jewish deli in my “neighborhood,” Jack’s Deli. As one Yelper describes it, “If you like traditional Jewish delis, this is your place. From the deli counter, to the no-nonsense “Brooklyn”-type staff and all the old biddies sitting in the dining room kvetching with their mumbling

husbands, its [sic] like you’re in a Woody Allen flick or Seinfeld episode!” I couldn’t agree more.

One of my foodie friends recommended Jack’s Deli to me, and I have been hooked ever since. Jack’s has been in business for over 30 years and is tucked away in a strip mall at the corner of Cedar and Green. It is around the

back of the strip mall just behind the BP station. The store front has about a million handicapped spots (I’m exaggerating – it’s more like 6), and you need to drive past it and park in the lot to the left.

Just as any respectable Jewish deli, they greet you with a glass of water and a plate of homemade kosher pickles. This last visit featured both kosher dill and kosher garlic and dill pickles. They help take the edge off while you peruse the menu and then wait for your food. Jack’s also serves jars of them to go in the lobby. I highly

recommend picking up a jar on your way out.

Both offer great sandwiches, corned beef and melt-in-your-mouth brisket, and other kosher delicacies. For those of you who like tongue, you can get it here, and my Jewish, former New Yorker friend swooned over it. Everything is made from scratch. Jack’s may not have a lunch counter, but it has its devoted regulars and features the best soup in my opinion! The flavor of their chicken soup broth is just a bit deeper and richer. Their version of The Mish Mash is called The Whole Magilla and, like Corky & Lenny’s, features a matzoh ball, kreplach, noodles, rice – all served in an extra 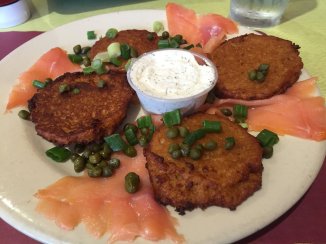 large bowl. I’ve ordered it to go several times and they give me a quart container brimming with goodness.

Most of the time I order a half sandwich and a cup of the matzoh ball soup. It doesn’t sound like a lot of food, but the sandwich is brimming over with sliced meat and the matzoh ball is filling. The beef is well-flavored, lean and cut thick enough to give the sandwich

some heft. The soup and half sandwich combo really fills you up. I prefer brisket over corned beef or pastrami, so my regular choice is half a brisket sandwich, which I doctor with just a little bit of the yellow mustard. My only complaint is that serving a spicy brown mustard like Stadium mustard or Gulden’s as well would really be nice.

My favorite sandwich at Jack’s is their Famous Brisket Dip. It features hot brisket with melted Swiss cheese and grilled onions grilled on Challah bread and served with a side of au jus and crinkle cut french fries. I have started ordering it without the au jus, because it tastes so delicious as is. Plus, as a Virgo I prefer less messy sandwiches, which au jus just

guarantees. The French fries are always crisp outside and buttery soft inside. The roasted beef brisket served with beef gravy over mashed potatoes or French fries is also divine – comfort food at its best!

I never have room for dessert when I eat here, but I hear their desserts are wonderful as well. 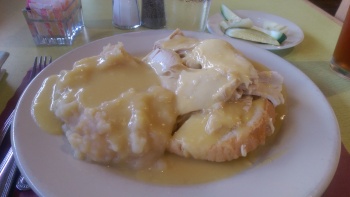 omelettes, corned beef hash, matzoh brei and L.E.O. Nova lox with eggs and onions. Be sure to hit the deli counter on your way out. Everything always looks and tastes fresh and delicious.

Update: They have recently renovated the cash register and dining areas to allow for more seating. I wouldn’t recognize the place. 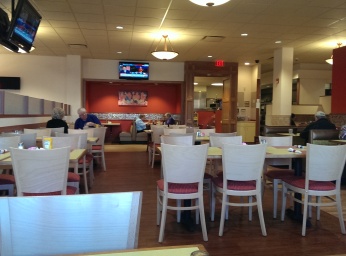