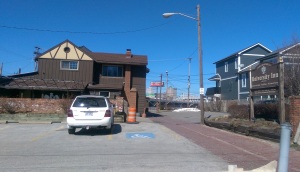 Sokolowski’s is a Cleveland institution. My father used to eat there all the time with his co-workers from Richman Brothers, and I grew up hearing about his lunches at Sokolowski’s, Sterle’s and the Hofbräuhaus. I finally got a chance to check it out for myself about ten years ago and have been a fan ever since. I was craving comfort food this afternoon, so I called some friends and we headed out to Sokolowski’s. We got there at around 11:30 to avoid the lunch rush, and got in line just in time because Lolly the Trolley let off a big group there just behind us.

Established in 1923, Sokolowski’s University Inn is one Cleveland’s oldest family owned and operated restaurants. Specializing in Polish and Eastern European cuisine, this Cleveland institution has been feeding its bratwurst, kielbasa (my dad’s favorite), pierogi, stuffed cabbage, cabbage and noodles, chicken paprikash, etc. to its customers for over 87 years.

Food is served cafeteria-style. There is always a crowd, but don’t worry – being cafeteria style the line moves fast. You line up, grab a tray and silverware and work your way down the line. I couldn’t help but start dancing when I grabbed my tray and heard the polka music. The first stop is salads (as well as beet salad and a delicious cucumber-dill salad) served on ice and saran-wrapped pies and cakes, followed by alcoholic or non-alcoholic beverages either from bus tubs or the fountain (and they offer several beers on tap – today they had my favorite, Reissdorfer Kölsch on tap for $5 for a pint, but I went with their ‘house’ brand grape soda). After that you are confronted with the hot foods. Every lunch and dinner is served with a roll, so they have a sign telling you to take one. You have to be quick with your order because they move quickly.

Hot food is constantly being brought out from the kitchen behind them. All lunches and dinners come with two sides, and they don’t give you a lot of time to think about it. Some of the available sides include pierogi, mashed potatoes and gravy, corn, green beans, and cabbage and noodles. You can also order soup and/or sandwiches (which come with a pickle and potato salad). Friday lunch and dinner features lots of fish choices – as well as mac and cheese.

Have a heart for those behind you and try to pay in cash if you can. It keeps the line moving. They have a $10.00 limit for credit cards. They have guys waiting at the cash register to carry your tray and escort you to a table. Normally I ask to sit in the room with the piano player. Tom “Mr. T at the Keys” Ballog plays during Wednesday through Saturday hours. It adds a nice ambiance to the meal. Dad also taught me to unload your tray onto the table when you sit down so they can quickly reuse them, but I don’t know if that is necessary anymore.

My choice today was the fresh bratwurst with a side of pierogi and corn. The woman behind the counter gave me corn and green beans. When I corrected her she slapped some pierogis on a plate for me and told me to tell the cashier (who is one of the owners) that it was a mistake. Well, I didn’t have the heart to do that and paid for the pierogis extra. They’re worth it. But you do need to be vigilant at the counter, because they managed to screw up each of our three orders somehow. In the end I was really pleased I had the corn and green beans (if you are a fan of canned green beans you will be thrilled. Yes, yes, when it comes to green beans I have no taste…), because I walked out of there this time not feeling overloaded with carbs. Sokolowski’s can be quite carb-heavy, as my friend who had the pierogi lunch with potato pancakes and mashed potatoes and gravy can attest. He ended up boxing half of his meal and bringing it home.

Since this is a Cleveland food blog, let me just talk about the pierogi for a second. Sokolowski’s pierogi may be small and only come filled with mashed potatoes and cheese, but they pack a flavorful punch. They are served in a pool of melted butter and sautéd onions. I dripped some of the butter on my t-shirt today and can still smell the onion and butter as I type this. About a year ago I did a taste test, going to Babushka’s Kitchen one night and Sokolowski’s for lunch the next day. I ordered the same thing – stuffed cabbage and pierogi. Babushka’s Kitchen’s pierogi are bigger and there are a lot more choices to choose from, but Sokolowski’s won my heart hands down. Babushka’s definitely gives them a run for their money, but you just can’t beat the flavor of Sokolowski’s pierogi. But for the record, Sokolowski’s stuffed cabbage blows Babushka’s away. It isn’t even a contest in my book. It may not be haute cuisine, but it tastes just like my Ukrainian grandma used to make it. 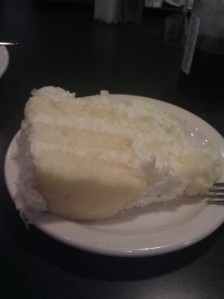 I had enough room for a bite of the coconut cream cake, which is one of my favorite desserts there (if they don’t have the rice pudding). It looks really heavy, but you wouldn’t believe how light and airy it is. It’s like biting into a cloud of moist cake, whipped cream and coconut. I also had a bite of my friend M.’s carrot cake, and it may have replaced the coconut cream cake in my favorites list. Whatever your dessert favorite, be it rice pudding, cherry, apple or blueberry pie (or whatever other flavor they have), chocolate cream pie, coconut cake, or carrot cake, you won’t go wrong grabbing it at the top of the cafeteria line – even if you have to box it up and bring it home with you, which is what I usually do.

Friday nights I can highly recommend the meatloaf. The slice of meatloaf almost hangs over the plate and has a nice tomato-chipotle glaze. One of the best meatloaves I have ever eaten in a restaurant.

The Innerbelt Bridge project has made it a little more difficult to find it, but the long line at 11:30 shows that it hasn’t killed business. Coming from the east, we got off at the Abbey Avenue exit, took a left on Fairfield Avenue, turned onto W. 11th and pulled into the parking lot on Abbey. Luckily there were signs to Sokolowski’s with arrows that we could follow. Sokolowski’s has directions on its website, but they should only serve as a guideline. If you head to Parallax and South Side you’ll find Sokolowski’s. And I promise it’s well worth the extra aggravation.

I had been debating between Slyman’s and Sokolowski’s today, but Slyman’s sandwiches are $11.00-12.00 and my bratwurst lunch with two sides at Sokolowski’s was $8.00. Sure, I paid extra for the cake, drink and side of pierogi, but I was very happy with my decision to eat at Sokolowski’s. Slyman’s will be there another day. Sokolowski’s is open Monday-Friday 11 am – 3 pm and Friday and Saturday from 5 pm – 9 pm and 4 pm – 9 pm respectively.

And did I mention that Anthony Bourdain ate here for his show “No Reservations”? The website also features Michael Symon talking about Sokolowski’s pierogi in “The Best Thing I Ever Ate.” Like I said, it’s an institution…