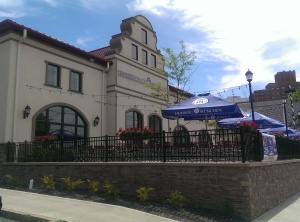 Anyone who has paid attention to this blog knows that I am a German translator. I lived in Austria for a year and Germany for six years, so I am very critical when it comes to German/Austrian food. I was really excited to hear about the Hofbräuhaus opening and was there on the first day it opened (standing in line with everyone else). Unfortunately they still had a bunch of kinks to work out, and there was a limited menu at the time. We still enjoyed our pretzels and Obatzda, beer and Schnitzel. I just wasn’t super impressed. I 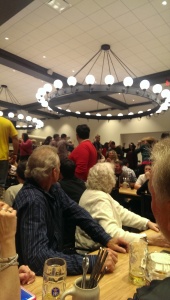 ‘ve been to the real Hofbräuhaus in Munich several times as well as the ones in Pittsburgh and Cincinnati (technically Covington, Kentucky). Obviously nothing compares to the real Hofbräuhaus. It is five floors of beer halls and has outstanding food and service. The beer gardens in Cincinnati was also a really good time, and the food was a welcome respite in Pittsburgh. So I was confident that the Hofbräuhaus would find its footing, and it has. I am pleased to report that they brew their beer on-site.

It should be noted that this incantation has absolutely nothing to do with the old Hofbrau Haus at E. 55th and St. Clair, which closed in 2000. The Hofbrau Haus, run by German immigrant Steve Bencic, imported Hofbräu beer but never produced it on-site. It also had no official ties to Munich. This is an official franchise of the 427-year old Hofbräuhaus (the “ducal brewery” in German) in Munich. It was founded in 1589 to serve beer to the Duke of Bavaria and eventually the people of Munich. They have a tent at the Munich Oktoberfest, and you can smell it from a mile away. Lots of drunken idiots. 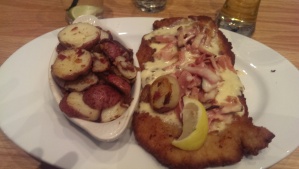 I always avoided it. The current Hofbräuhaus is part of a franchise chain, which started in 2003, but not in the sense that they are everywhere. They seem to be particular about where they open a location.

On my first visit I was so excited for the Jägerschnitzel that I was absolutely crushed when I was told they didn’t have it available yet. I ordered the cordon blue Schnitzel and the roasted potatoes (I hate German potato salad in the States. It shouldn’t be sweet). 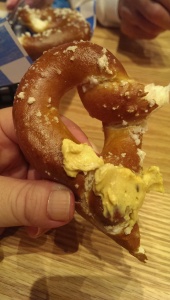 I was underwhelmed by the meal. I am used to Austrian schnitzel that is pounded super thin and hangs off the plate. The schnitzel here was a little greasy and smaller than I am used to (and I suspect that it was food service schnitzel), but from the photos on Yelp it appears that was just opening week. The schnitzels look less uniform now, as they should.

Obatzda, which is a fave of mine, is a cheese mixture of brie or camembert (they use brie), cream cheese, butter, onion, seasonings like paprika or caraway, and some beer. It is usually served 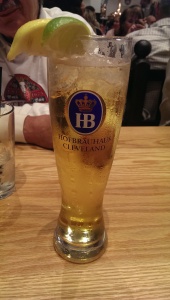 with bread or pretzels. The Hofbräuhaus’ version was just as good as I had hoped it would be. The pretzels were delicious and were a great accompaniment to the Obatzda. They were fluffy with just the right amount of crust and salt.

I was thrilled to be able to order a Radler, which is a mixture of soda and beer (a shandy). I drink fairly slowly so a liter is wasted on me as it warms up. I prefer the half liters so I can drink them cold. The Radler was the perfect size for me, and came with a lemon and a lime garnish, which was honestly a little weird. You drink Kristallweizen with lemon – not a shandy. But hey, it’s Cleveland, not Germany, and I’ll cut them some slack. I’m happy to report that my most 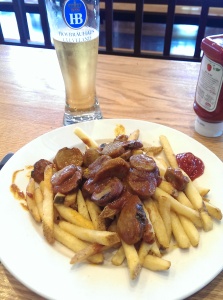 recent Radler was not served with any garnish.

Flash forward to now. One of the people I follow on Instagram posted a photo of the Currywurst the other day. I love Currywurst, which is a Frankfurter or brat that is fried, sliced and doused in curry powder and a curry sauce. It is a German fast food delight when you’ve been drinking and comes accompanied with fries. I went there the next day for lunch to order one. It was as good as I had hoped. I was thrilled. The Wurst had a nice snap to it from the casing, the curry powder was present and the sauce was a nice accompaniment to the Wurst and the fries. I finished all the Wurst and half the fries. I think the true lunch portion would be perfect, since it only uses one sausage. Two and a 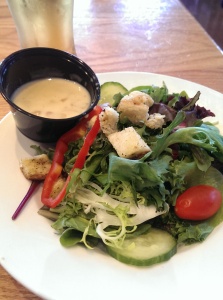 mess of fries was a bit much.

Since I’m not a total glutton I ordered a side salad as well. It was a nice mix of fresh mixed greens accompanied by a red pepper ring, a couple cherry tomatoes, cucumber slices and croutons. I ordered the hot bacon dressing and was very happy I did. It was nice and warm with a sweet creaminess that was a nice topping to the salad.

I wish parking wasn’t so difficult, but that’s the way things are in downtown Cleveland. I’ve managed to find street parking and walk a few blocks to the restaurant. There are lots of parking lots in the area,

but they can be quite pricey. And they offer valet service, but I have no idea what that costs. If you are going to drink and not have a designated driver you can hop on a bus or call Uber. In any event, I definitely enjoyed the lunch time ambiance better than the party ambiance of the evenings. There was no live band, everyone was low key, no one was dancing on the tables, and there were no shot skis being shared. But if you are in the mood for a lively evening the Hofbrauhaus is the place for you.

I’ll be back to try some more of the entrees. If you want to be adventurous I suggest you order the Schweinshaxe or Leberkäse. If you want something lighter go for the Wurstsalat. I had it at a German Cultural Garden event, and it was quite good. Vegetarians will love the Käsespätzle. They also have a vegetarian schnitzel.

In any case, Mahlzeit und Prost! 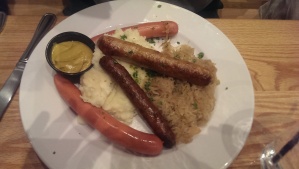