I had no idea what Bonchon was, but one of the people I follow on Instagram checked in here on its opening night. It looked delicious so I googled it.

Several of us met there (on Broadview Road in Seven Hills) a few days later to check it out. It is an Asian fusion restaurant with a wide variety of menu options,

but they specialize in Korean fried chicken and wings.

The parking lot was packed, but they offered complementary valet. I’m not sure if it will continue, but it was nice to drop off the car and run in since I was running late due to traffic. It was the night of Game 3 of the World Series, so the TVs were going and once the game started it got pretty loud.

Let’s talk about what they do best – the fried chicken. The chicken is dipped in corn starch and double fried. They are super crispy and

packed with flavor. We ordered a ton off the menu and shared a lot of it. The chicken is delicious. A++ Would order again. We ordered a medium half and half combo – half spicy and half soy garlic. The spicy was a nice pleasant heat that wasn’t overwhelming. It is served with a small bowl of pickled radishes that help extinguish the heat.

The “drums” are full-sized drum sticks. My friends who ordered this in a combo had the drums brought out first since they were finished already. They enjoyed them just as much as the wings.

friend and I also split an order of potstickers. The potstickers also come in the spicy and soy garlic flavor offerings. Once again we ordered half and half. The wrappers were a little thicker than I like, but the filling itself was flavorful and firm. You could tell they were made in-house due to the lack of uniformity. I always like to see that.

I was less impressed with the Japchae (more like a teriyaki noodle bowl – I think it was a bit overcooked last night) and shu mai (I’ll try them fried next time, they were too delicate steamed). Others at the table ordered sliders, bulgogi, and tteokbokki. I’ll definitely be back. Our waitress was super competent and deftly handled a table of 8. They are still in “soft opening” mode and will be gradually adding things to the menu. Be sure to check it out. I may head there again tomorrow for some more wings. They are that good. 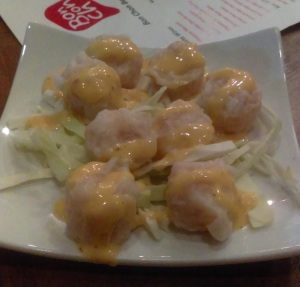 Update:
I can highly recommend the Salmon-Avocado Ball. I got one to go on Superbowl Sunday 2017 along with some wings and loved every bite. I paired it with Triscuits, but it is served alone in the restaurant. So good!