In keeping with my decision to eat at three church fish fries and three restaurant fish fries, this week a restaurant fish fry was on the docket. My original decision was to go to Sachsenheim Hall for their fish fry, but St. Patrick’s Day threw a wrench in my plans. They were not serving fish on Friday, but instead were doing an Irish buffet. One thing most people don’t know about me is that I hate corned beef. I can stomach it in a Reuben, but I also only eat a Reuben once every five years or so. Corned beef and boiled cabbage, carrots and potatoes? Gag me with a pitchfork. An Irish buffet was not going to be my focus.

I had wanted to try the fish fry at El Carnicero from the moment one of the members of All Things Food in Cleveland posted a photo ad for it in the group. It just looked amazing. I have tried three times to get to El Carnicero, but 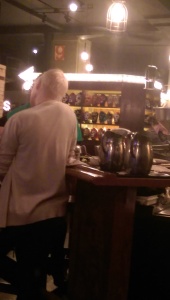 something has always come up to thwart my plans to organize something for my dining out group. The first time it was closed for a staff holiday party, the second time I was sick and the group went without me, and I think I was out of town for the third time my friends went. When Sachsenheim fell through I focused on El Carnicero, which is also on the west side. Apparently El Carcinero sometimes closes on St. Patrick’s Day, but luckily my friend Nancy ran into Chef/Owner Eric Williams, who assured her they would be open and would be serving their fish fry.

You wouldn’t think a Mexican restaurant would be a good choice, but it really was! They serve Dos Equis beer battered lake perch and also spice things up with a chipotle tartar sauce and chimichurri-drizzled French fries. I was very excited about the prospect. I wasn’t going to let a little snow and ice deter me this time. 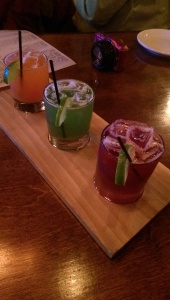 After wending my way past a car accident on I-90 that closed three lanes of traffic, I showed up about ten minutes after our agreed upon meeting time. I was thrilled to see that the restaurant has a very large parking lot behind it. I got one of the last spots in the lot and trudged through the sloppy, wintry mess. Even though El Carnicero does not take reservations Chef Eric had been more than happy to reserve a table of four for us. It turns out it wasn’t necessary, since there were quite a few tables available. Thanks, St. Patrick’s Day! It isn’t usually the case in this very popular eatery. The bar had some revelers, but it was a really good vibe overall. Our waitress was wearing green lipstick, which I thought was awesome. My friends already had their drinks, since they passed the accident right after it happened, while traffic was practically at a standstill when I got there. I was going to order a blood orange margarita until Edsel’s regular margarita arrived with its bright

green color in honor of the holiday. To make things even more difficult Edsel highly recommended the hibiscus flower margarita. What was a girl to do? Why, order the margarita sampler and enjoy all three! They were all delicious, but I loved the blood orange the best, with the hibiscus coming a very close second. El Carnicero definitely serves some delicious margaritas! Slainte!

We ordered a few appetizers to share. I chose the smoked gouda queso dip,

Edsel ordered the sikil pak (toasted and ground pepita mixed with lime and chile jalapeño – as he explained “kind of like a hummus but made with pepita”), and Nancy (and the rest of us) wanted guacamole. It was a tough decision as to which guac to order, but we went with the tradicional. I would like to go back and order a sampler to try a few of the others as well. Next time. I loved all three appetizers, but I was really pleased with the queso dip. I kept dripping it on myself even though I tried everything to ensure I didn’t, but that’s just how I roll. It’s a gift.

All four of us ordered the fish fry. We can go back and order tamales, taquitos, etc. next time. We were all really glad we ordered the fish. The beer batter casing was perfectly cooked, not too crisp and not too soggy. The fish was light and flaky and almost melted in our mouths. It was the best piece of fish I’ve had in a while. I also loved the chimichurri French fries. The fries were 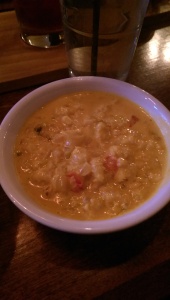 shoestring, which get cold easily. Nancy thought hers were too cold and had a fresh batch delivered from the kitchen. I didn’t come for the fries, so I wasn’t as concerned. I really enjoyed the chimichurri sauce, which was fresh and light. I was craving it again once I left. Luckily I had to ask for a box and had the other half as leftovers.

Edsel ordered the brussel sprouts as a side, which I found to be very lemony but nicely roasted. Being a sucker for creamed corn I ordered the esquite (achiote creamed corn) and polished it off. It had a nice zing to it and had some heft to it that I think might have been potatoes.

After a delicious meal from start to finish, we left El Carnicero very happy and ventured our way back to the highway to head home in the snow. It was a nice way to celebrate St. Patrick’s Day.