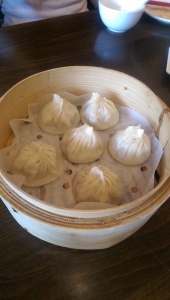 There is nothing more satisfying than a dumpling. Just about every culture has dumplings. The most iconic of the Chinese dumpling is the soup dumpling or Xiao Long Bao. The tender pillows of dough are filled with solidified broth or aspic that then liquifies when steamed. Eating a soup dumpling is an art form – put a dumpling carefully on a soup spoon (being careful not to tear it), bite off the top and allow the broth inside to cool for a second before slurping it down and then eating the dumpling. 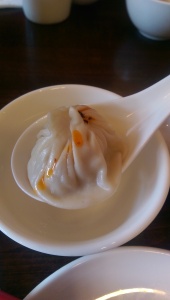 It was not easy to find soup dumplings here in Cleveland. My first experience with them was at Emperor’s Palace, but we had to get there early because they would sell out quickly. I also had them at Bo Loong once, but the soup had seeped out of the dumplings while still on the cart. They were flavorful but had no liquid in them. Well, I am happy to announce that that is no longer the case. Enter LJ Shanghai, which specializes in soup dumplings. It opened in the old Saigon Grille restaurant space, one door over from No. 1 Pho on Superior. They make all their dumplings by hand, but the noodles come from a place in Toronto. They are tender and ethereal. We each got 2, and everyone agreed they would be back for more. The dough 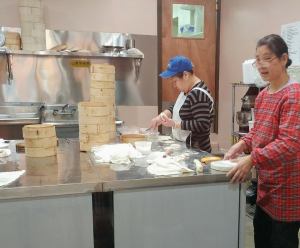 was just right, and they were the perfect temperature – no burned mouths to report.

I got together a group of enthusiasts for a visit so we could try their menu – and try the menu we did! We started off with an order of cucumber with garlic and then enjoyed three orders of soup dumplings as well as the veggie and shrimp and pork wonton soups, the Chongqing spicy beef noodle soup, Shanghai Pan Fried Flat Noodles, braised duck in soy sauce, an order of pig ear with

chili sauce, and nine Shanghai shrimp & veggie egg rolls (one for each person).

Everyone loved everything – except the pig ear, which everyone was happy to give to the one person in our group who is a pig ear enthusiast. The texture was very off-putting. I had hoped it would be a little crisper. But hey, we at least tried them. Our pig ear enthusiast

loved them, so if you like pig ear you’ll be happy.

The duck was okay. Some of us would have preferred it to be a little more crisp. The soy flavor really came out. I unfortunately do not have a photo of it because my shot was too blurry.

I have become a big fan of smashed Chinese cucumbers in the past year or so. This version is more cucumbery than others I have had, with minced garlic clearly visible. The photo shows them with chili sauce, but that wasn’t the case. The cucumbers were fresh, crisp and very lightly pickled, and a nice, refreshing counter to the dumplings and noodles, but I find I prefer

to add chili sauce, which can be found on the table along with vinegar (for the soup dumplings) and soy sauce.

I really enjoyed the Shanghai pan fried flat noodles too. They got delivered to the other end of the table, so I wasn’t able to photograph them. They were very simple, but had a great flavor to them.

The soups were a big hit. We passed the bowls around and tried each one. The beef in the spicy beef noodle soup was extremely tender. If you like spicy soup you will love this.

I found it a wee too spicy for me, but it slowly grew on me. That said, I fell in love with their wonton soup. The broth is light and has a bright, gingery flavor that I adore. The wonton soups come with 10 handmade wonton dumplings. I preferred the shrimp and pork wonton soup. The filling is densely packed and each one has a full mini-shrimp in it. I’m not sure what the garnish is along with the scallions – it could be seaweed. It doesn’t matter. The whole thing just works together so well. I loved it so much I went back for lunch this week and ordered

the cucumbers, shrimp and pork wonton soup and an egg roll. I was tempted to get soup dumplings too, but decided that was too much for one person.

The egg roll is more like a spring roll – it was very thin and crisp with a nice filling. There was no residual oil on the plate, nor did I get any on my fingers when eating it. The soup and egg roll were perfect. I had a few cucumbers and took the rest home for later.

One little side note: I really like their tea cups. They are more substantial than the little finger bowl-sized cups you get at most restaurants and hold more tea. They also have built-in grooves for your fingers to grasp them.

In short, I really enjoyed LJ Shanghai. I am in love with their wonton soup and look forward to eating it all winter. When I went back for lunch the other day on my own I fully planned on bringing half home with me, but I ate all ten dumplings and had to hold myself back from slurping the broth out of the bowl. The gingery flavor of the broth is my new addiction.