If you are a regular reader you might have noticed that I enjoy Ethiopian food. I think it’s super fun and has great flavor. A third Ethiopian restaurant just opened in Cleveland – this time on the west side in Old Brooklyn. My friends and I decided to check it out. We were so excited that we didn’t let something like a winter weather advisory stop us. We had planned on meeting at 6:30 but pushed it up a half hour to get a jump on the snow that was supposed to arrive starting at 7 p.m. It was a good thing we did, because driving home several traffic lights were out and power was out at my home from midnight until 11:30 a.m. the next day. Luckily I had kept my leftovers on the back porch.

between Cleveland Heights and Old Brooklyn. What would normally take me 20 minutes took me 45. Several of my friends were already there and had ordered beverages. I parked in the large parking lot behind the building and walked around to the front entrance. Don’t be me. There is a door in the back up a couple of stairs. It’s much more convenient.

The place is a little odd. It’s part neighborhood bar and part Ethiopian restaurant. When entering from the front, the neighborhood bar is on the right and the dining room is on the left. If you aren’t greeted right away feel free to seat yourself. They had no Ethiopian beer yet, but had several crappy beers (Budweiser, MGD, Miller, Heineken,

Corona, etc.) to choose from. Pass. Hopefully that changes. E. had ordered a large Yuengling. My other friend had a large vodka and tonic. They also serve Ethiopian honey wine, but I decided to stick with soda since the drive home would be treacherous. Also worth noting: this is the only Ethiopian restaurant that I’ve ever seen with a kids menu and chicken tenders, wings, grilled cheese, and burgers. Guess they are trying to still keep the locals frequenting the bar happy. It’s a shame if the locals don’t try being adventurous, because the Ethiopian food was really good.

We ordered five orders of sambusa to start. We were a little unsure of what we were going to get, because there were two kinds listed on the various menus – one vegetarian with potato, onion, peas and lentils and one with ground beef. Happily we were served the vegetarian ones, because our friend who was running later than me had been craving them

and specifically asked us to order it for her. Lucy’s sambusa uses a different dough than I am used to. They were a little lighter and flakier than the ones I have had in the past, and they were huge. Everyone but me finished both of theirs. I took my second one home for later and reheated it for lunch.

If you’ve read my other Ethiopian restaurant posts here you know that I love tikil gomen, which is the cabbage, carrot and potato dish on their menu they call Alicha Alkilt. I wanted to try one of their tibs, and the Lega Tibs was the only one that served tikil gomen as its side. The others had salad. Lega Tibs are billed as “cubes of lean beef marinated with green pepper, seasoned

butter, exotic spices, onion, rosemary, garlic and fresh cut tomatoes,” but I would swear that it was lamb. The meat was a little tough and gristly. I enjoyed the flavor, and loved the tikil gomen. The seasoning was great in both dishes. I also ordered a side of their homemade cottage cheese. Ethiopian cottage cheese is not as creamy as American cottage cheese, but it does a nice job cutting down on the heat of some dishes.

Three of my friends ordered combination platters – vegetarian, beef, and chicken, respectively, so I was able to try a lot of different things. I absolutely loved the flavor of the Kaywat from the beef combination platter. It was ground beef (not cubes as billed) that were stewed with red hot pepper (berbere – a very typical Ethiopian flavor profile) and flavored with onion, garlic, ginger and seasoned butter. I had a couple bites of that and would definitely order it again in the future.

The vegetarian combination platter features red hot lentils, mild lentils, yellow split peas, shiro, collard greens, cabbage and salad. My friend, who is new to Cleveland and was on a quest to try all of the Ethiopian restaurants in DC before her husband was transferred here, also ordered a Timatim Fit for the table. Timatim Fit is a salad that uses chopped tomatoes, green peppers, lemon, onion and olive oil mixed with pieces of injera. It was a nice version of it.

My other friend ordered the chicken combination platter just to try the Kitfo, which isn’t chicken. Kitfo is Ethiopian steak tartar made with lean chopped beef, seasoned with spiced butter, cardamom and mitmita (a powdered seasoning mix that is orange-red in color and contains ground African bird’s eye chili peppers, cardamom seed, cloves, and salt). They serve the kitfo either raw, rare, or medium, so don’t let the tartar of it all scare you off. It came out medium on the combination platter. It was very tender and flavorful. The fifth person in our intrepid band loves raw Kitfo, so I knew he would be ordering that. He enjoyed it and had no leftovers either.

Dorowat can be quite spicy, but it is one of the most popular and well-known Ethiopian dishes. The different lentil dishes have different spices and flavor profiles. The red lentils can be quite spicy. The collard greens are tender and have a nice flavor. The cabbage, carrot and potato (tikil gomen) is not spicy at all and has a lot of tumeric. I make it at home sometimes. 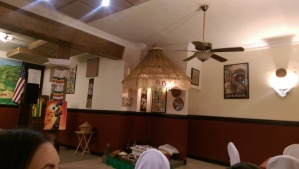 Everyone really enjoyed their meals. Ethiopian can be deceiving, because when you get the food put in front of you it doesn’t look like it would be filling. However, the injera you use to eat the food with expands and fills you up. My ex-boyfriend and I used to split a vegetarian combo between the two of us at Empress Taytu, so I was prepared to bring home leftovers to enjoy the next day. Most of us did. I was very impressed that my friend with the beef combination platter finished hers. She said it was just so good she couldn’t stop eating it.

I’ve hopefully intrigued you enough to give it a try if you haven’t yet. The service was a little slow, but they were very friendly and kept coming out to update us on the status of our orders. We were enjoying ourselves, so it didn’t really bother us. When we ventured out into the snowy tundra she came running after us because one of us had forgotten their leftovers. We were cleaning off our cars, so none of us had left yet. The drive home was a bit harrowing, but we all made it home safe and had full bellies.