I am a huge fan of EDWINS on Shaker Square, so I knew I wanted to support Brandon Chrostowski and his latest culinary institute in Medina. I organized a dinner with a bunch of my foodie friends shortly after it opened, and we trekked down to Medina looking forward to a good meal. We were not disappointed. The restaurant is located at the old Medina Steakhouse & Saloon. They

have done a nice job paring the decor down to match the sophisticated French menu. There was ample parking and two main rooms to seat diners. There are even a few tables on the front porch for those who enjoy dining al fresco.

Despite my attempt to get there early I was the last to arrive due to heavy traffic. When I arrived the entire table was enjoying their French 75s. Who was I to buck the trend? The 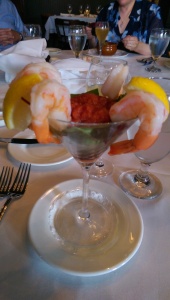 French 75 is one of my favorite drinks, but it can suffer from a heavy hand. Luckily the person behind the bar makes a perfect French 75. It was delightfully refreshing. There was some furor in Medina about whether Sérénite should be awarded a liquor license since the restaurant is a training ground for people in addiction recovery. I am glad good sense prevailed, and the restaurant was given a license. Their employees need to learn how to work around it without giving into the temptation, and if they do fail they are in a supportive environment that will catch them as they fall and quickly set them back on the path. I wish them all the best of luck! They also offer a non-alcoholic menu for those who prefer one. Since we were there in the early days

our server was understandably nervous, but when something went awry she quickly and efficiently took care of it. Things go wrong when you dine out, especially in the first few weeks. It’s all how the service staff handle things, and they did a great job taking care of us. That said, for a table of 7 only one of us had a major issue, which was immediately rectified (one of my friend’s mac n cheese was lukewarm, but they whisked it away and quickly rectified the problem). Everyone else was delighted with their meals. She was too once

the mac n cheese was hotter.

I ate here twice in the first two weeks of opening, once with a small group and then with a friend to enjoy a quick drink and nibble before my nieces’ middle school orchestra concert. Unfortunately I’ve been swamped with work and haven’t had the chance to write about it until now. As a result of my visits, I was able to sample about half the menu. Although Sérénite is similar to EDWINS it does not have an identical menu, which allowed me to try some new things. The biggest surprises were the frog legs and the artichokes. More on those later.

I decided to stick with a classic appetizer-entree-dessert on my first visit, so I tried not to fill up too much on any of the courses. I ordered the shrimp cocktail. The shrimp were plump and juice and averaged out to $3 a shrimp. The cocktail sauce had the perfect amount of horseradish bite to it. The presentation was also flawless.

I was able to try a frog leg, which was absolutely delicious and perfectly prepared. They are pan-fried in butter and garlic. The meat fell from the tiny bones and were a huge hit with my friends who ordered them. The serving size is generous, so I could imagine ordering them to share or even as an entree.

choices available, including several steaks. To see page two click on the arrow at the bottom of the online menu that appears when you hover over it. Don’t be a noob like me. That said, the restaurant may want to change their format if they want older, less savvy diners to be aware of page two.

I had decided on the Steak Frites (hanger steak with fries and Bérnaise sauce), but when I arrived and saw the other choices I was torn. After consulting with the server and my fellow diners I decided to order a steak along with a couple of sides. The ‘Le Boeuf’ steaks do not come with sides. You have to order them a

la carte. I ordered the artichokes from the appetizer section and the risotto from the sides. I decided to order a New York prime strip steak, but could have also ordered the filet mignon or a bone-in ribeye. The steaks come with a sauce of your choice. I chose the Bordelaise sauce and could not have been more pleased. Bordelaise is a red wine demi-glace with shallots and butter. It was flavorful without overpowering the flavor of the steak. I was also able to taste the au poivre (cognac cream sauce with demi-glace and green peppercorns) and Béarnaise (rich butter sauce with tarragon vinegar and shallots) sauces. The other s

auce is a Diane sauce featuring demi-glace, mushrooms, shallots, brandy and cream), which I knew I loved but decided to order something I don’t make myself. For those of you who are wondering what demi-glace is, it is a combination of espagnole sauce and a rich brown stock. The strip steak was extremely flavorful and tender, just as it should be. I loved the Bordelaise sauce as well. The braised artichokes were tender, and the white wine butter sauce delicious. The risotto features mushrooms, which is what made me decide to order it over the frites. The rice was al dente, and the flavor was phenomenal. I took half of everything home and enjoyed the meal again the next day for lunch. After all, I needed to save room for dessert.

I am a huge fan of EDWINS’ creme brulee. I think it is the best I have ever had. 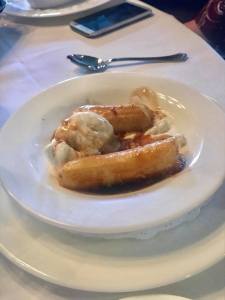 So I wanted to order it, but then learned that they also offer Bananas Foster, which is prepared tableside. Luckily, one of my friends and I decided to share both. The creme brulee was just as delicious as I remembered, creamy with a nice crust of caramelized sugar that broke with a tap of the spoon and complemented the custard. The surprise for me was that I adored the Bananas Foster even more. The tableside preparation was enjoyable, even though I have seen it prepared before in New Orleans. The chef did a great job with it. The bananas were perfectly flambeed and were a great complement to the creamy vanilla ice cream. I would definitely go back just for the Bananas Foster!

And go back I did within the week. I learned that my oldest niece was going to be the concertmaster of her middle school orchestra, so I decided to go down early 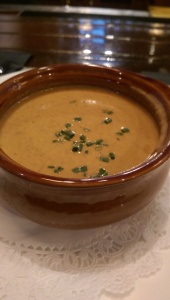 and enjoy a quick bite with my friend who I had shared the desserts with. We sat at the bar this time and both ordered two appetizers. I chose the lobster bisque (I love French onion soup, but did not want to drip it) and the escargot. The lobster bisque was delightful – creamy and a nice underlying sherry base. But the star of the meal was the escargot. The Burgundy snails came out bubbling in the butter and garlic, and I enjoyed sopping up the sauce with Sérénite’s great homemade bread. I paid my bill and rushed out to go to the concert and was able to greet another friend who was taking her parents out for a nice meal as they walked in.

I wish I lived closer, because the Bananas Foster alone is worth the trip. Your meal can be fairly cheap if you stick with a few of the lower end items on the menu, but it can also be a perfect ‘special night’ venue if you are willing to splurge a little. I highly recommend you check them out as well and support their worthy cause.