Cleveland’s got a new Szechuan restaurant in town, and it’s become my friends’ new obsession. Sichuan Hot Pot quietly opened in April 2018 on Rockwell Avenue in the building that houses Emperor’s Palace. The storefront seems rather quiet and unassuming. You walk in and have to go through another door to the right. Make sure the door shuts behind 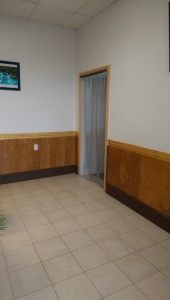 you properly, because it forms a wind tunnel.

We keep meaning to order the hot pot, but we are enjoying discovering all the various entrees too much. It’s best enjoying everything as a group. When it comes to Chinese food we are a bunch of sharers, so everyone orders a different dish and we dig in. We then get the bill, add a 20% tip, and divide the total by however many people are in the group. I have a handy app for that, so it is really easy. The bill never comes out to more than $20 per person (it’s usually between $12-18).

The first time I ate at Sichuan Hot Pot (just before Christmas) there were 7 of us. We were the only non-Asian table in the place. We ordered 8 different dishes (one person ordered two because they were vegetarian items and cheap). We had the Dan Dan Noodles, Chongqing Noodles, Lamb Kebabs served with crinkle cut French fries (what??), Shredded Pork with Pickled Cabbage Noodles, Ma Po Tofu, Sour & Spicy Cucumbers, and a Roasted Eggplant appetizer with what looked like a green chili pesto on it. I chose the Crispy Ribs with Garlic Sauce (S7), which was delicious. The ribs were perfectly fried (popcorn chicken-sized) and served along with fried onions and fresh green scallions. I was very happy I ordered it and would happily order it again. However, the absolute standouts for me were the Shredded Pork and Pickled Cabbage Noodles and the Dan Dan Noodles. I have never been a fan of Dan Dan Noodles, but I really like their version. The Shredded Pork was the huge hit at the table. We ordered it on a whim, and I will never go there and not order it ever. It has a delicate flavor and has a soup-like consistency. Ordering small bowls for everyone to enjoy it would not be a bad idea. The Chongqing Noodles were also lovely. Apart from the eggplant, which everyone was saying was very hot so I avoided it, I didn’t find anything so spicy hot that I couldn’t eat it. Szechuan cooking has a nice heat to it, but if I can tolerate it anyone can. We were served a complementary Tofu fa with a smoky sauce and sesame seeds for dessert.

The second time I was with a different group, with only three of us having been there already. There were six of us this time. This time we were the only table in the place, but I hear it gets busy on the weekends and at night. A few tables joined us by the time we were finishing up – including a friend of one of my friends, which was a hoot. We were there on a Tuesday for lunch. I made sure to order the Shredded Pork and Pickled Cabbage Noodle again. Two of our group had already gotten there and ordered the Dan Dan Noodles because they were hungry. We also ordered Dried Beef with Spicy Sauce (C12 – which I found to be just okay, but my friend D. loves it), “Chicken with Special Sauce” (word of warning – it’s a cold poached chicken and celery dish with bones – I wasn’t a fan), Crispy Big Ribs with Garlic Sauce (S15 – whole ribs on a bed of cabbage – quite tasty if a little dry), Sour & Spicy Cucumbers, and Sliced Potatoes with Scallions (which was too American if you ask me – basically warm parsley potatoes). The Sliced Potato dish was good, so it would be a good choice for kids or less adventurous diners. I certainly didn’t expect it at an Asian restaurant. The standout dish for me this time was a different version of eggplant – the Eggplant with Garlic Sauce (M19). I could not stop eating it, and I look forward to enjoying it again this coming Friday.

Like I said, I am going back there for lunch on Friday with some of the folks from the previous meals and a couple new people we are introducing the place to. I look forward to trying some new dishes as well as the favorites. I’m tempted by the Crispy Fish Hot & Spicy.

I ate all the things and then some at Momocho. Margarita flight, guac with trout and bacon, chorizo fundido, cream corn and fried ice cream. Not pictured: Chile relleno
Walter is doing a pop-up to try out the new items @iceicedaisys . Next to Saucission on Fleet Avenue. He sold out 3 hours early today, so get there early tomorrow
Follow Cleveland Rocks, Cleveland Eats on WordPress.com