Luchita’s has been in my awareness since it opened in the 1980s. My father used to work at Richman Brothers with Luchita’s son-in-law, Tedd. He would talk about Luchita and her cooking. I didn’t get a chance to try it for myself until after I moved back from Germany in the early 2000s. Luchita is long retired, but it is still family-run.

From the outside, Luchita’s looks like a dingy corner bar in a working-class neighborhood, but magic happens inside. Luchita’s is one of Cleveland’s best Mexican restaurants.

I learned about Luchita’s fish fry last year in one of my food groups. Since I am a sucker for Mexican street corn I knew this had to be on the list this Lenten season. I got a group of friends to trek to W. 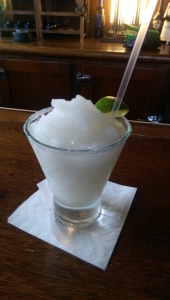 117th in Lakewood to enjoy this delicious and out-of-the-ordinary fish fry. I made a reservation because they want prior notice for tables of 6+.

My one friend and I carpooled together and got there very early because we were expecting heavy traffic on the roads. We arrived 40 minutes before the 6:30 reservation, so we parked ourselves at the bar and had a margarita and dished all things Broadway. The margarita was freshly made, but I

was less than impressed with it. It tasted mostly like ice/water. I’ve had good margaritas at Luchita’s before, so I’m going to chalk it up as a one-off oops.

Once two more in our party arrived we were shown to our table in the adjacent dining room, even though we were still before the 6:30 res. We managed to order another round of drinks after we sat, and I decided on a sangria. This was definitely

the better choice. One of my dining companions upgraded the tequila and enjoyed her margarita. We fell on the delicious chips and salsa like a bunch of locusts. By the time our other friend arrived the server brought us another salsa and chips. The chips are warm and inviting, and the salsa had a nice kick and flavor to it. I am embarrassed to say I filled up quite a bit on that

salsa – and had a couple of bites of a side of delicious and creamy guac one of my dining companions ordered.

We were there for the fish fry, so we did not bother perusing the menu closely. All five of us ordered the fish fry, which made our server’s life easier. The fish fry features beer battered fish, chipotle tartar sauce, Mexican street corn, mac & cheese with salsa verde, and a cucumber-radish-carrot 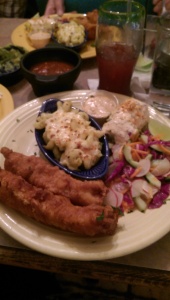 salad that was delicious. The fish was perfectly fried and not too greasy. The Mexican street corn was just a delicious mess. I ended up wearing it down the front of my shirt and had to wash my hands. The mac n cheese was a nice version of noodles covered in a cheese with a bit of a kick to it. The cavatappi were not overcooked, and the noodle to cheese ratio was just right. I have no idea what was in the dressing for the salad/slaw, but we all agreed that it was fantastic. The dinner was $17.95 and worth it.

I couldn’t make up my mind, so I also ordered the lobster and shrimp quesadilla. I figured we could all eat it as an appetizer, not realizing that it was a dinner portion size. I should have known it would be a lot when the waitress was taken aback when I ordered it. It was filled with large chunks of lobster and shrimp, and I really, really loved every bite. Be forewarned: the quesadillas were $18.95. I was surprised when I got the bill, but it truly was worth it with the chunks of seafood.

We rolled out of there with boxes for our leftovers and happy stomachs. If you are looking for a good fish fry and love Mexican definitely check this place out!