I have a new rule to live by: if a fish fry is run by boys stay far away.

Benedictine High School is a private, Roman Catholic, college preparatory high school for men, located in Cleveland off Martin Luther King Boulevard. The school serves grades 9–12 and has an enrollment of just under 400 young men.

I don’t even know where to start with this disaster. OK, driving in. Apart from a sign on the road there is no indication which outbuilding houses the fish fry. I had to ask a bunch of young men who explained it was in the cafeteria, but don’t ask me where that was. I drove toward a building that said Field House and asked someone else and he explained I could park and walk under the walkway and it would be on the right. Luckily the weather was nice and the door was propped open or I wouldn’t have had a clue

which door to go in. Some signage with arrows would be very helpful. Or even just someone standing in the parking lot directing people where to go. But the fish fry wasn’t all that well-attended, so that might be overkill. I should have caught the clue then. 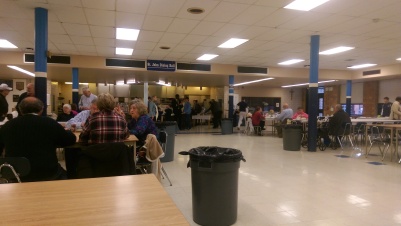 Once I walked into the cafeteria I had to figure out what was going on. The big sign on the wall was apparently from lunch. I missed the silverware, cafeteria trays and napkins, so if you go know that it’s against the wall to your right. There were four dinners to choose from. The signs taped to a table informed me that I could have a two pieces of fried fish, one piece of baked fish, nine pieces of shrimp or eight pierogi.

The dinners come with baked potato or french fries, cole slaw or applesauce, bread (grab a piece from the open bags of wheat or white bread sitting there), and coffee, tea or milk. Side orders were available for $2.50 or $3.50 depending on what you wanted. Pop was $0.50 a can. Dessert was available at a bake sale off to the side of the cafeteria. I spent $14 for my meal, sides and two cans of pop.

I was there at around 5:30 and was informed they were out of fish and it would be about 2 minutes. As I stood there they plated up a side of pierogi and a bowl 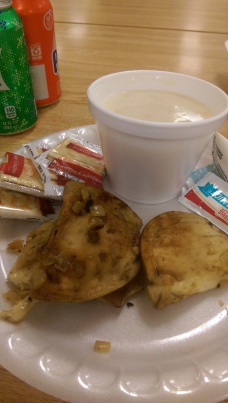 of chowder and stack of crackers for me. I grabbed some condiments and my slice of bread and a pat of butter and waited. When the fish came out they started serving the people who had just walked in until one of the older men supervising noticed and had them serve me. Some of the fish had broken apart and the young man tried to give me a couple pieces parts until I pointed out to the supervisor that there were supposed to be two pieces. Awkward.

Once I paid, bought my pop and sat down I opened up the to-go box (which I requested because I knew I wouldn’t finish) and was just

overwhelmed by the food service of it all. I thought I’d have a couple pierogi and chowder with a few bites of fish and pack up the rest. The chowder was the blandest, worst chowder I’ve ever had, so I popped the lid back on and will be doctoring it up tomorrow for lunch. Nothing a little dill and seasoned salt can’t fix. The pierogi did not look appetizing at all, but they weren’t as dry as they look. That was the best part of the meal. The fish was okay. It could have been moister, but it was at least edible. The cole slaw was okay. I chose the baked potato since it is easier to warm up as leftovers, although this isn’t a meal I am looking forward to eating again.

When I left at six o’clock they had run out of individual sour cream packets and had a pint of sour cream and a spoon sitting on the table with the condiments.

If you ever find yourself at this fish fry (but I wouldn’t recommend it), do yourself and order the grilled cheese. It seemed like the most popular choice.