St. Andrew Ukrainian Catholic Church has a special place in my heart. It is where my grandparents and uncle are buried. My dad spent many childhood weekends in the fellowship hall. When all of my friends couldn’t make the fish fry at St. Gabriel’s in Concord I decided to stop by the cemetery and grab some excellent fish and pierogi. I was at this fish fry a few years ago with fellow bloggers Tom and Alicia. Tom is the one who inspired my love of fish fries with his Lenten Project. He would visit two fish fries a night and rate them. His post on April 4, 2011 commemorates our first visit to St. Andrew. 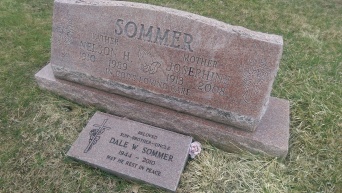 My ideal fish fry has fried fish and homemade pierogi, which is surprisingly not all that common. St. Andrew and many other fish fries in Parma are known for their pierogi more than for their fish. I drove past St. Josaphat Ukrainian Catholic Cathedral, St. Anthony of Padua, and St. Vladimir Ukrainian Orthodox Cathedral on my way to St. Andrew. All three have stellar pierogi and are on State Road.

After turning onto Pleasant Valley and then Hoertz, I stopped by my grandparents’ and uncle’s grave to say hi before heading to the Hall. I drove through the cemetery, but you can bypass the cemetery by following the signs to the Hall to the left of the cemetery.

Dinners are served from 5 to 7:30 during Lent. On our last visit Tom lamented that the fish was a little dry, so I got there fairly early to see if an earlier start time means better fish. I am pleased to say it does. The place was packed, and I queued up in line only to learn that there was a separate area for to-go orders. I had had lunch at The Blue Door earlier that day so 5 pm was a good start time but not good because I wasn’t hungry at the time. I also wondered if I would find a seat.

Apart from a line to the kitchen window to pick up the dinners, the eat-in queue uses the same stations as the to-go queue. There is also someone who will try to accommodate larger groups by reserving seats while you are in line. The place is not big though, so groups may be out of luck depending on when they are there.

After ordering my fried fish and pierogi dinner ($13) and a side of cabbage and noodles ($3) I queued up for my condiments and dessert. I was offered a choice of cole slaw or apple sauce. The server suggested the cole slaw when I asked. It was homemade and topped with a dash of paprika. They also had smooth and chunky apple sauce. I was next offered a slice of bread, and it was served by a woman wearing gloves who put it in a sandwich bag for me. No need to stick your hand in a bag of bread here! I should also note all the people serving food wore plastic head coverings.

I had a tough time deciding what dessert to choose. There was a wide variety of cake slices, brownies, cookies and chocolate pudding, but I

decided to get the panna cotta topped with pureed strawberries. She managed to put a top on it and put it in a box so I could transport it to go. It ended up flipping over in the trunk of my car, but the lid kept everything in place and it only leaked a little juice into the napkins in the bag and the strawberries slid to the side. I could have also gotten coffee or decaf coffee at that station, because coffee is included in the meal price. I then made my way back to the to-go area and waited until the runner with my meal called out my name and verified my order. I grabbed a ginger ale from the bar before heading out.

This is where things got a little esoteric. As I was leaving, Iz’s version of Somewhere Over The Rainbow was playing over the speaker outside. There was no music inside as far as I can recall, but for some reason they were piping out music in front of the Hall and it just happened to be a version of my uncle’s favorite song. We played Eva Cassidy’s version at his funeral. I can only assume he was sending me a message thanking me for the visit, and I walked to my car sobbing. I called my sister in tears to share it with her, and we talked about how much we missed our relatives. I particularly miss them around Easter, because my grandmother’s Easter dinners were legendary and my favorite meal every year growing up. Easter was so special at their house. She would make ham and fresh kielbasa and serve them with homemade pierogi (I have a feeling they were from St. Josaphat’s) and soft, yeasty dinner rolls. The house always smelled wonderful, and we would have an Easter egg hunt while dressed in our Easter finery. Those were the days! I had to take a minute to compose myself before driving off.

Once I got home I dove into the meal. The fish was flaky and moist, the pierogi were plump and delicious, and the cole slaw was one of the best I’ve had this Lenten season. I saved half of the meal for tomorrow, but I finished the dessert. I’m almost sad this isn’t the last Fish Fry Friday, because it would have definitely been ending on a high note.

Note: the fish and pierogi were just as divine for breakfast the next day after 5 minutes in the air fryer.