I hit the “I can’t look at another fried fish” point and was going to sit today out – until one of my friends re-posted a status update from EDWINS Butcher Shop advertising a six piece shrimp dinner with fries and slaw for $5.99 or a 12 piece for $9.99 on Facebook. Shrimp sounded good to me, so I called to make sure they had some left (it was about 40 minutes to their closing time) and headed out. I only live 11 minutes from there, so it was nice to stick close to home tonight.

I parked on the street outside the butcher shop, since it was just on 6:30, and headed

into the butcher shop. It’s a cute little storefront. About half of it is tables for people to eat their food, and the other half is a large meat counter, coolers, a small freezer and a well-curated selection of specialty items.

I purchased my shrimp dinner and then browsed while I waited. I was not going to shop, but then I was tempted by the Sprecher’s Root Beer and prepared Banana Pudding in one of the coolers. So then of course I needed a strip steak, Colman’s mustard powder, some chocolate for wine pairings and Italian

bread from Orlando. Right as I was checking out, my dinner came out of the kitchen. I grabbed my shopping bag and headed out as the next customer ordered a couple fish dinners and a chicken dinner. It was 6:50.

anticipated a good meal. I was not disappointed. The shrimp were pounded a little thinner than I like, but they were still moist with a crunchy exterior. There was a slice of lemon hidden under the fries, which I squeezed over the shrimp to give it a light, bright lemon flavor. The fries had a nice light seasoning to them, and the slaw was good. I didn’t come for the 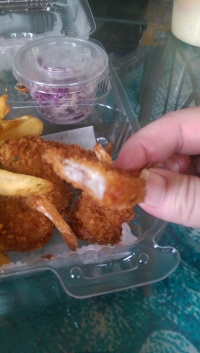 slaw though. The 12 piece dinner was delicious and definitely hit the spot. I ate a couple spoonfuls of creamy and luscious banana pudding and popped it back in the fridge for later.

EDWINS is also serving a fried cod sandwich and catfish po’boy for Lent if you want something portable. I’ll definitely be back to try some of their other sandwiches and hot meals. They regularly serve a 1/2 chicken, fried chicken, ribs, brisket, pulled pork, burgers, and wings with a host of sides.