As the Tremont Tap House website explains, “Located on Cleveland’s Southside in the historic Tremont district, The Tremont TapHouse is the city’s first gastropub. The term gastropub is derived from London and depicts a casual pub that serves an upscale cuisine complimented by the assortment of wine and beer the tavern offers.  The TapHouse boasts a meticulous and extensive selection of hand crafted American and European beers. The list consists of 100 plus examples of fine beer, 24 of which are available on draft.” 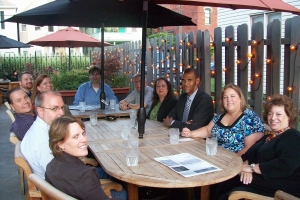 When I told my father I ate at the Tremont Tap House he exclaimed, “That used to be Pukach’s. Your Uncle Barney lived in the house behind it.” You see, my father grew up in the Tremont area and tells me all kinds of interesting stories about when he was a kid. GIs home from World War II used to rent rooms in homes and would hang out at the corner bars because they missed the company. They would also congregate at the Lincoln Park Bath House, because their rooms did not have modern bathing facilities.

They would sit outside and used to give him a dime to run next door for a pack of smokes and a bucket of beer when he was 8 or so.  This kind of stuff fascinates me, so I am really tempted to take him to the Tremont Tap House with me the next time I go, which will hopefully be soon.

We enjoyed a delightful evening at the Tremont Tap House the other night. The weather was perfect, not too hot and not too cool. We sat on the patio under several umbrellas and enjoyed the mood lights once the sun went down. The beer list is quite impressive. I normally don’t take pictures of menus, but I couldn’t resist taking a photo of this one.

The food was divine. I had a tough time deciding what to order. I ended up ordering the Salmon BLT on marble rye. It was delicious. The fries that accompanied it were thick and perfectly seasoned (you can see them peeking out from behind the sandwich). 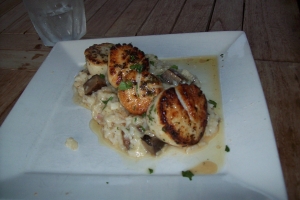 Everyone thoroughly enjoyed their meals. From the macaroni and cheese with dried figs, rosemary and brie (for our vegetarian, but it was so good I will probably order it next time!) to the seared sea scallops with white truffle oil and mushroom risotto or smoked ham and turkey sandwich with brie and cranberry relish served on raisin walnut bread (Thanksgiving in a

sandwich) and small plates like blackened scallops with red onion jam, blue cheese and walnuts to beer cheese soup and side salads, there was something for everyone. The fried egg burger with Swiss cheese and carmelized onions was a particular hit. The group had a discussion about how to best order the burger to bring out the flavors, with the quote “It is very important to me that it be medium rare.”

The service was a little slow, but they had another large party upstairs, which I think overwhelmed them. The mac and cheese, which was ordered after we had all ordered by one of our late-comers, was comped without her asking because she had such a long wait for it. One of the dining out members, who wasn’t able to join us and tried it separately, now claims it is one of his favorite restaurants in Cleveland to bring guests or just relax and watch a game.