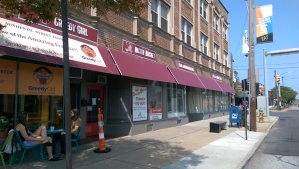 Mr. Brisket is the place to go in the Heights for all things meat. This butcher shop and deli is located on Taylor Road just south of Cedar Road and has been around since 1973. It is known among those in the know as one of the best butcher shops and delis around. They sell high-end USDA prime beef, veal, lamb, pork, poultry and seafood as well as some outstanding deli meats and sandwiches. They are particularly known for their pastrami, corned beef, and (obviously)

brisket as well as their Jewish delicacies like chopped liver, knishes, and potato pancakes. Some consider the pastrami to be the best in the city.

The place has zero ambiance and no seating. It’s carry-out only. Don’t let its looks deceive you. Everyone raves that the corned beef sandwiches are better than Jack’s Deli or Corky and Lenny’s.

When I am in the mood for a sandwich I pop down to Mister Brisket. If I’m lucky I can get a parking space on the street, but most of the time I have to park across the street at the shopping center and cross the street. I’ve had several of their sandwiches. The sandwiches are loaded with meat and come with a pickle. You can also purchase sides of cole slaw, macaroni or potato salad, chips, cookies, brownies, and cans of soda. You can buy single sandwiches or a boxed lunch. The large boxed lunch features a large sandwich, potato salad or cole slaw, cookie, pickle spear, napkin, beverage and utensils for $12.95. The smaller boxed lunch comes with a smaller sandwich, chips, cookie, pickle spear, napkin, beverage and utensils for $9.95. It’s a good deal 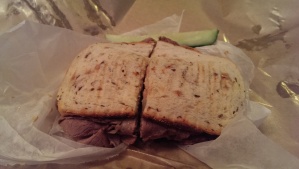 and is usually what I choose and a large side of potato salad or mac salad.

My first time I had to order the Reuben even though I don’t like corned beef. The meat was moist and lean. Not grisly or salty. They were light on the Swiss, as a proper Reuben should be. The Thousand Island dressing was a creamy accompaniment. The bread was nothing to write home about, but it was very tasty and soft. It was a proper rye bread – none of that marbled stuff. They also have great pickle spears that accompany the sandwiches.

All of the sandwiches can be toasted upon request. They offer a choice of Swiss, American, provolone or pepper jack, Stadium, 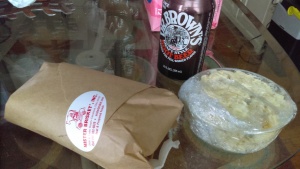 I love the look of the Charles Barr, which features corned beef and pastrami on rye with Swiss and yellow mustard, but since I’m not a huge fan of either meat I stick with the brisket, turkey and roast beef. The Duke is even more impressive, with layers of corned beef, turkey, salami and brisket with Swiss cheese. It’s over one pound of sandwich. The photo of the Duke (below left) is from the Mister Brisket web site, since there is no way I could eat one when

I usually can only eat half a sandwich and save the other half for later.

The only thing I haven’t enjoyed from there was their matzo ball soup. The broth and matzo balls come frozen, and that does them no favors. The broth was extremely salty and tasted like it was straight chicken stock (no carrots, no parsley, etc.). The matzo balls were mealy. It might have been a fluke, but I won’t be buying it again. I ended up throwing it all out, which about killed me because I love matzo ball soup.

You can also order special order cuts of meat. I deliver Meals on Wheels, and the volunteer appreciation dinner serves Mister Brisket BBQ brisket. You can bring it back to the store after you’ve prepared it and they’ll even slice it for you (properly – against the grain for brisket). It’s all part of the service. One of my Jewish friends is ordering her fish and brisket here for Rosh Hashanah next week. The store also carries special products like roasted turkey and roasted chicken for people to

purchase for the holidays.

They are closed on Sundays and Mondays, and offer a special on Tuesdays featuring $1 off any large sandwich. They are only open until 4:00 Tuesday through Thursday, 5:00 on Friday, and 3:00 on Saturdays.

They are good people. They also takes donations to send kosher salamis to the troops. The

store charges $20 for a shipment of salami to the troops, and it can be sent virtually anywhere, even to service members who are posted on aircraft carriers and other ships. They also accept donations to the cause. This is the kind of place I like to support.

One thought on “Mister Brisket”