There’s a new ramen place in town that is worth a visit. Xinji opened in October 2017 on Lorain Avenue in Ohio City and is a welcome addition to the Cleveland dining scene. The Cantonese proprietor and chef got his start making sushi and working at Akira Sushi and Hibachi in Solon as well as Momocho and Gingko and the famous Momofuku in New York City. In any event, he is meticulous about sourcing his ingredients, and it shows. Most importantly, the ramen noodles are Sun Noodle ramen noodles – the best one according to my friends in the know.

The parking is mostly street parking, but you don’t need to feed the meters after six p.m. and the parking lot across the street 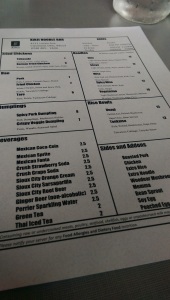 from Xinji doesn’t appear to be patrolled (someone was teaching their girlfriend to drive a stick shift in the parking lot when we were leaving). If I’m wrong please mention it in the comments! I was lucky enough to get a spot on the street across from Xinji.

The restaurant has a modern, industrial look, with plenty of exposed brick walls and duct work along with rather austere metal tables and chairs in steel gray and deep blue. The chairs could be a bit more comfortable. I 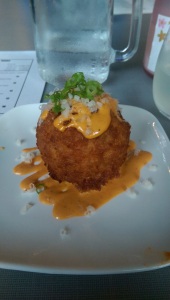 don’t know why our local ramen places have such uncomfortable chairs. Maybe to make sure diners don’t linger?

The menu is fairly limited, with five ramen choices (unfortunately tonkatsu broth is not one of the choices), two rice bowls, and lots of different appetizers to choose from, including wings, fried chicken, two different dumplings, three different kimchi balls, and three different bao (steam buns – the flat ones, not the round fluffy ones). I ordered the special kimchi ball with peaches and miso ramen with chicken (instead of pork) and a soy egg added to it. I am not a huge fan of pork belly, but next time I’ll suck it up because the

extras added up! The kimchi ball was interesting. It was nicely fried and was pretty to look at. Cutting into it, it had a nice kick to it, but was not too heavy. Others at my table ordered the spicy pork dumplings, which were absolutely outstanding (my friend N. still raves about them) and the fried chicken bao. The dumplings are amazing – and not to be missed! The fried chicken in the bao was really nicely fried and had great flavor.

As for my miso ramen, the broth was very dense and rich – almost too much so. It is served with scallion, woodear mushrooms, corn, 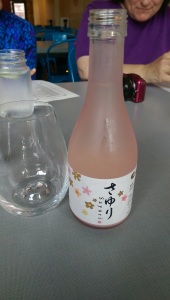 and bean sprouts. My one criticism is that it was lukewarm and cooled quickly. Ramen is supposed to be eaten quickly, but I would have liked it to be a little hotter. Not hot so you burn your mouth, but a little more warmth would be appreciated. The noodles had a rougher texture and nice bite to them. They weren’t overcooked. The service that first night was really slow. Like glacially slow. I normally don’t complain about service, but I would have liked a second sake at some point. This sake was absolutely delicious. My friend N. ordered the champagne sake, but I preferred my choice. It was light and delicious with just a hint of fruit.

I intend to try a tonkatsu rice bowl on my next visit, which will hopefully be soon. If you haven’t been yet, be sure to give it a try. I know you won’t regret it. They are now serving during lunchtime hours as well, so you have plenty of opportunities.