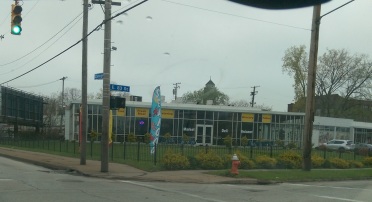 I drive down Carnegie Avenue all the time, so I was curious about the metal and glass building that went up just down from the Cleveland Clinic at the E. 82nd Street intersection. One of my friends raved about her visit to the place on Facebook, so I knew I had to check it out. I’m glad I did. I’ve been a regular shopper ever

Rumi’s has a cafeteria-style deli that offers hot entrees, beef and chicken kebabs, sandwiches, a fresh salad bar and most intriguingly an olive bar. The choices the most recent time I was there included spaghetti with cheese and meat, fried chicken and a spicy Chinese stir fry. They also had several soups. The kebabs are on spits just like I am familiar with from Germany. The meat is roasted on the spit and shaved off when you order. They then heat it on the flat top grill, which I find a 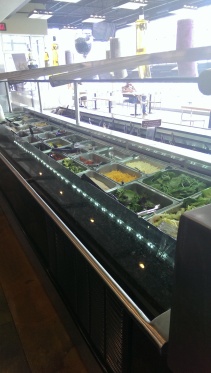 bit odd since it should be hot from the spit. But it isn’t dried out, so I am not going to question it.

Being a fan of kebabs, I have yet to venture far from that choice. They offer the kebab as a sandwich with pita or as an entree with 2 sides for $10.95. There are four different sides to choose from. My first time was extremely orange. I chose the mac n 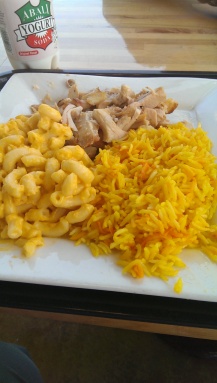 cheese and the saffron rice to go with the chicken kebab. The meat was tender and not dried out at all. The mac n cheese was a little bland, but it was certainly palatable. The rice was moist and delicious. They also offer Afghani Pulao (pilau), Indian Biryani, korma, rotisserie chicken with a pomegranate glaze, and lots of other choices. The restaurant is open from 10 to 2 on Sunday and Monday and 9 a.m. to 8:30 p.m. on Tuesday through Saturday. The store is open from 9 a.m. to 9 p.m. during the week and 10 a.m. to 7 p.m. on Sunday.

We wandered around the market, which had just opened, and were very pleased to see the variety of Turkish, Middle Eastern and Indian foods available. The shelves were much more stocked on my second visit, and I picked up a lot of fun things like pickled mango (chutney?), Mango Tang, mint tea, orange and cinnamon herbal tea, stuffed eggplant and stuffed pepper in a plastic, ready-to-eat tub, and some juices. Most intriguing was a Basil Seed Drink with White Grape flavor. It was really, really good. The 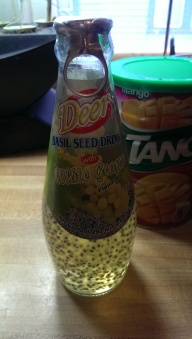 texture of the basil seed reminded me of a really tiny bubble tea, and the white grape flavor was heavenly. I can see myself going back and buying lots of these next time. Now that the place has been open a while I keep an eye on the expiration dates, which sometimes have expired. I buy boxes of baklava, produce, frozen entrees and appetizers, and various teas here as well. I do chuckle when I notice the Aldi brand small appliances for sale.

On my second visit I tried the chicken kebab with the saffron rice and sauteed vegetables. The chicken kebab was even better than the beef kebab. The chicken kebab was moist and paired really well with bites of rice and veggies. I was most surprised by how much I loved the sauteed vegetables. I have never been a huge fan of celery, but the sauteed celery really dominated the mix and was quite flavorful. The other vegetables included broccoli, onion and yellow and red peppers. I really enjoyed it a lot, and felt like my meal was quite healthy (if you don’t count 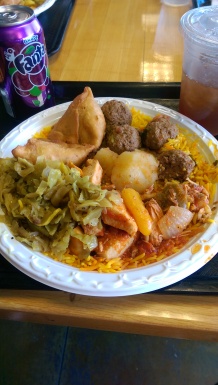 the Mountain Dew from the soda fountain).

My friends and I also met here for their Ramadan buffet last year. I have several friends who are Muslim, so I wanted to share their holiday with them. The buffet was very plentiful, and the food is weighed. It is open before sunset as well, so we got there a little earlier than sunset to avoid the crowd. We piled our plates with lots of good food, and much of it was quite spicy.

They serve American deli sandwiches, chicken, turkey, and burgers to 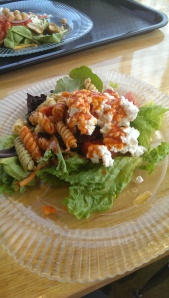 cater to the Clinic crowd who don’t necessarily want Persian food, but want a quick and affordable lunch option. Their fried chicken also appears to be quite popular.

A word of warning: don’t think the red sauce on the salad bar is French dressing. It’s hot sauce. I smothered my beautiful salad with it, only to find it was too hot to eat. I ate around the sauce, but at around $5.40 a pound I was upset that I wasted a lot of it.

It's summer! I stop and overpay at every kid-run Kool-aid and lemonade stand.
Mama Catena's lasagna soup is delicious. I don't know why I haven't ordered it before.
Follow Cleveland Rocks, Cleveland Eats on WordPress.com