Polpetta is the brain child of restauranteurs Brian Okin and Adam Bostwick of Cork & Cleaver and Graffiti: A Social Kitchen fame. I have had some amazing meals from these two chefs. They closed the two popular restaurants to focus on the Polpetta concept, which relies heavily on the theme of “balls.” The decor is heavy on old meat grinders, which are used as the door handle and light fixtures, and artwork with cleverly-hidden balls in them. 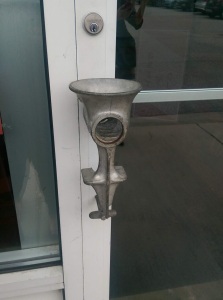 They launched the Polpetta concept at Porco when Walter Hyde was cooking in the tiny kitchen there. That was where I had my first taste of Sunday Supper, which I personally think is the best spaghetti and meatballs I have had in Cleveland. Usually restaurant spaghetti and meatballs are bland, but the meatballs here are well-seasoned and paired with a herbaceous pomodoro red sauce. The pasta was al dente and easy to twirl. When I told my server that I think they are the best spaghetti and meatballs in Cleveland he told me about a woman from Little Italy who came in and was vocally critical of everything, but once she had the Sunday Supper she was quiet and said she would be back. He said she’s been back at least seven times. I agree, Nonna.

Once they opened their restaurant on Detroit Road in Rocky River it was on my list of places to try, but it took a while to make my way over there. I finally met a group of friends there for a nice meal, and that night I accidentally ordered what I think is the best thing on the menu, the Spinach and Meatball Dip. It features mini-meatballs in a spinach-parmesan-roasted tomatoes bechamel sauce and fun little pita dippers. This dip is Chef Adam at his best. It is rich and lush, and I could have eaten the whole thing by myself and regretted it. Everyone at the table adored it, and we practically licked the serving plate clean. 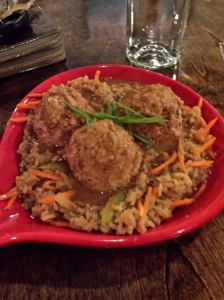 I was less impressed by my entree choice that evening. I ordered The Adam, which features chicken meatballs, Thai peanut sauce, and fried rice. I love Adam’s fried rice, which I first enjoyed as spam fried rice at a pop-up at Toast several years ago. It was then included on the menu at Graffiti, and I happily ordered it several times. Unfortunately the Thai peanut sauce was too bitter that night. I was expecting a nice, creamy Thai peanut sauce, and I think it had too much hot sauce in it that night. My friend Nancy loves his Thai peanut sauce, so apparently it was an anomaly. Luckily I had eaten a ton of the appetizer, so I didn’t go away hungry. But I knew they could do better based on past experience. 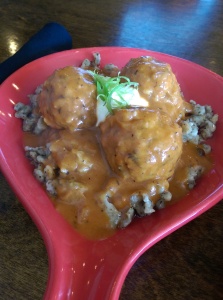 I left wishing I had ordered the Grandma Bos, which is a chicken paprikash featuring chicken meatballs, paprikash sauce, and herbed spaetzle. When I ordered it the server asked if I wanted sour cream on top. Yes, please. This was a satisfying dish. The chicken meatballs were nicely seasoned, albeit a little denser than I had hoped. Overall the meatballs here are very dense, but at least they won’t fall apart. The herbed spaetzle are not the traditional (i.e., bland) German spätzle I am used to, but I liked the herb flavor profile and the pan-fried crispiness held up well against the paprikash sauce. I would order this again and again.

I ordered the Cereal Balls for dessert, which are made from several different cereals molded into rice krispie-like balls served with milk panna cotta and fresh berries and bananas. I first enjoyed Adam’s panna cotta at a grill evening on the Graffiti patio, so I was looking forward to that magic being recreated. He used cereal milk for that one, but the Polpetta panna cotta just uses milk so it was not as magical – even though it was tasty.

If you want a dessert that will bowl you over, order the Fat Kid 3.0, which features fried cookie dough balls, ice cream, chips, candy and fun. I got to taste the OG Fat Kid at a Graffiti Throw Back dinner at Polpetta a couple of months ago. That one was outrageously good and featured french fries, which was a fun pairing with the ice cream and chocolate and nerds. It is definitely a dessert to share though. 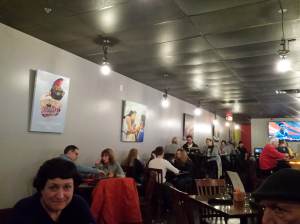