I wrote a Best Bites of 2018 last year, but by the time I finished it it was so late into the new year that I deleted it. I’m making sure I don’t procrastinate this year. 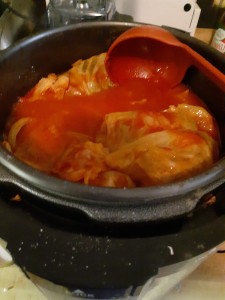 I continued cooking at home more and learned how to make stuffed cabbage in the electric pressure cooker. That was a game changer. Stuffed cabbage always seemed so intimidating – so I’d just go to Sokolowski’s and get one when I had a craving. Now I can make a big batch and freeze them to enjoy over a few months whenever I want. Jeffrey from Pressure Luck Cooking shared his Grandma Lil’s stuffed cabbage recipe, and I made them for the first time last January for my parents’ birthday party. Stuffed cabbage is my father’s favorite thing in the world. I fed the entire family of 7 and sent some home with him. I brought him some last week again when we had hot dogs roasted in the fireplace. If you follow Jeffrey’s recipe, I recommend using half of the tomato juice (one 46 oz can instead of two) and halving the other sauce ingredients. I’ve found it is too much sauce for the 8 quart pressure cooker, and I threw a bunch of it out the first time. Half the amount is perfect and still plenty saucy.

I’ve been enjoying a variety of soups every month at the Cleveland Soup and Bread Experiment at the BottleHouse in Cleveland Heights. Every month about six to eight volunteers make a batch of soup each and bring it the BottleHouse. There is always a good variety of soups, including vegan and vegetarian options. Any possible allergens are noted on the soup signs. On The Rise donates a variety of bread and baked goods. The proceeds go to a different charity every month. This month’s Soup and Bread Experiment is on Wednesday the 15th (it tends to be on the third Wednesday of the month) from 6:30-8:30 and will be benefiting the Greater Cleveland Food Bank. I haven’t decided what I’ll be making, but I’ve made autumn lentil and pumpkin soup, split pea and ham, zuppa toscana, straciatella, beef barley and Italian wedding soup in the past. Some of my favorites from other soup makers include Judi Strauss’ grandmother’s mushroom soup, Mulligatawny soup, and tortellini and kielbasa soup.

Sichuan Hot Pot continues to be a draw for my friends and me. We get a nice-sized group together (6 or 8), and everyone orders one thing for the table to share. My favorites include the crispy fish hot & spicy, garlic shrimp, and their roasted eggplant with garlic sauce (we’ve learned to ask for the sauce on the side so the eggplant stays crisp). The shredded pork with pickled cabbage (pictured here) was an early favorite, as were the crispy spare ribs. We have only had one or two dishes that did not thrill us.

I went on a queso kick for a while this summer and learned I enjoyed chorizo – especially if it is combined with queso. I always thought it was too spicy for me. My friend Dale ordered this queso and chorizo at Blue Habanero, and I ignored the combo app platter I ordered for the table to help inhale his. No other queso has exceeded the excellence of this one, and the tortilla chips have some good flavor to them as well. Paired with an octopus (margarita and sangria) I was a very happy girl that night.

Polpetta is my favorite place to go for special dinners. They did a Throwback Dinner honoring all the great things from Graffiti: a Social Kitchen. The Graffiti Artist featured the chorizo potato skin, French onion soup egg roll and a pb&j wing. The second course was an ancient grain salad. The third course was salmon on a delectable cauliflower puree with fried Brussels, and the fourth course was the Deconstructed Monte Cristo (my fave). Rounded off with the O.G. Fat Kid. We all loved it. We enjoyed Adam Bostwick’s whimsy so much that I was the first person to reserve a table (for 8 people) for their Christmas Dinner, which featured courses inspired by Christmas specials like Rudolph the Red-Nosed Reindeer (a potato croquette with a red, The Grinch (“Roast Beast”), A Christmas Story (duck over coconut rice), and the most unusual dish but biggest hit, Chocolate Spaghetti inspired by the movie Elf. Adam said it was the weirdest thing he’d ever made, and he was nervous about how it would be received. Well, we’re still talking about it – in a good way.

My sister’s family lives in Medina, so when I attend an orchestra concert, softball game, or swim meet there I am usually hungry when I head home. I do enjoy eating at Sérénité or 111 Bistro, but lately Santosuosso has been my later-in-the-night stop. I enjoy their Meatball and Sausage Casserole a lot, but the side salad that comes with the meal is the main draw for me. I order it with the Italian house salad dressing, and it comes with the perfect balance of dressing, lettuce, cheese and side veggies (cucumber, tomato and chickpeas). For some reason it tastes better than any other side salad I’ve been served.

One of my friends discovered Mama Marie’s Ukrainian Kitchen in Parma, and we have all been checking it out. It is located next to State Meats on Ridge, and is super-tiny. There are three booths where only two of them can be occupied at the same time as well as two small two-tops. Most of their business is carry out. I enjoyed the most delicious and humongous Kielbasa Sandwich there. It is served on a perfectly soft bun on a bed of sauerkraut. I enjoyed every single bite. The pierogis were quite good too!

We said goodbye to Marta’s in Euclid in September 2019. I was unable to order my favorite Svickova then, but I got to enjoy it in March. The Wienerschnitzel and Czech bread dumplings were a great second choice in September. I’m going to miss those bread dumplings!

2019 was the year I fell in love with Mama Catena Vino e Cucina (also in Euclid). I found it after searching for somewhere close to eat after an event at the public library. They were vote Best Sinful Dessert in 2018, and I recognized the dining room from the video as soon as I stepped into the restaurant. The amazing cannoli cake features two layers of vanilla cake, one layer of chocolate cake, and tons of cannoli filling and crushed cannoli shells. I ordered it for a friend’s birthday when the dining group had dinner there. Everyone loved it – including me and I don’t like usually like cannolis. In fact, I loved it so much that I then ordered it to bring to my birthday party at Corleone’s in August. It was a HUGE hit. You have to pre-order it, but you can pre-order single servings if you are dining there and can plan ahead. I also recommend their Sunday Sauce, which is served with a meatball, slice of sausage and pork that is falling apart because it’s been simmering in marinara sauce for hours! This family-run business treated me like family after the second time I walked in. It has turned into one of my favorite restaurants in town.

My Friday nights and Saturday mornings in Lent were booked with fish fries and pancake breakfasts. The fish fries and pancake breakfasts were hit or miss. You can read all about them in the blog. My favorite fish fry was at St. Andrew’s in Parma, and my favorite pancake breakfast was in Burton at the high school (they served omelettes along with the AYCE pancakes). Some girlfriends and I did a paczki crawl one Sunday after a bad pancake breakfast on the West Side. We started by comparing Biagio’s and Seven Roses’, which I had bought the day before, then stopped at Becker’s (unfortunately there were no paczki that day), Chuppa’s, and Colozza’s. Chuppa’s had a banana custard paczki that I adored; however, my favorite paczkis remain Michael Angelo’s and Rudy’s Strudel. Rudy’s Hough Bakery paczki is absolutely amazing, and just FYI Rudy’s also serves savory paczki – I heated mine up in my air fryer at 360 for 5 minutes.

A must for me is Sokolowski’s clam bake in October. Every Saturday in October from 4-9 they serve a clam bake with either a 1/2 chicken or 12 oz strip steak as well as a ton of other really tempting menu choices. Since it was a spontaneous decision and I hadn’t preordered I was afraid they would run out by the time I made it to the counter because the line was long (it started outside the back door and threaded its way through the dining room), but luckily they had one. (Plan B would have been to just cobble something together from the chowder, appetizer order of clams, and a kielbasa meal.) Their New England Clam Chowder was my favorite part of the meal this year. It was creamy and delicious with lots of chopped clams and big chunks of bacon. The red-skin potatoes were creamy and perfectly cooked as well. I need to get back here to enjoy the chowder again soon. I hope they don’t just serve this during the clam bake season. But I have to mention that normally I ignore the clam broth at clam bakes. I am so glad I didn’t ignore the clam broth here. It was buttery and flavorful, and it was my second favorite part of the meal – and that’s saying something since I ordered a strip steak and clams!

Gunselman’s Tavern serves a burger of the month. December’s burger was the Christmas Dinner, featuring a 1/2 lb burger patty from the West Side Market, shaved (thick shaved!) prime rib, horseradish aioli, rosemary au jus, arugula and tomato on a weck bun. My friend and I split one the first time I went (with onion rings instead of fries), and I went back a week later for lunch to enjoy it again. It is without a doubt the best burger I have ever eaten, edging out the burger at Annie’s Island Fresh Burgers on Mamalahoa Hwy. in Kealakekua, Hawaii.

Le Petit Triangle’s Raspberry and Mango French toast made with challah was not only a feast for the eyes – it was also a feast for the tummy. I can’t even begin to describe had delectable this was. I enjoyed every single bite. I went to brunch there with a friend, and she ordered this and gave me a taste. I went back a couple days later to order my own and enjoyed it on the patio with a good book. In fact, this might have been the best thing I’ve eaten all year.

P.S. It isn’t in Cleveland, but deserves a mention because it ranks as one of my favorite French onion soups of all-time. I was in Palm Springs for a conference in October and enjoyed a French onion soup at Pomme Frite French & Belgian Cuisine that was covered in so much melty cheese that it was served with a pair of scissors. Now *that* is my kind of soup! If you find yourself in Palm Springs be sure to check it out! 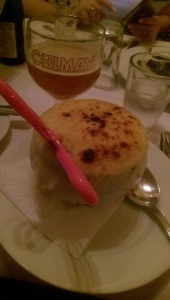 I look forward to what 2020 will bring! Happy New Year!