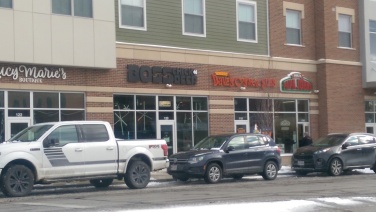 Located on Front Street in Berea, this women-owned restaurant features fried chicken wings and tenders and locally brewed beer. I imagine it fits quite well into the Baldwin Wallace college culture.

Boss ChickNBeer is a unique restaurant – everything that is fried is gluten-free, as they use rice flour and soybean oil for their deep-fried and battered chicken. All the products that are in the fryers are all gluten free, and there is no cross contamination. The pasta and some buns are the only non-GF items. This is one of those places that picks one thing to do and does it well. 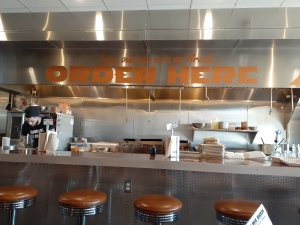 Like the name says, it focuses on chicken and beer. If you don’t want beer you can help yourself to the free sweet or unsweetened iced tea and water in the dispensers in the back.

The storefront itself is rather small. It features bar seating and a few tables along the wall. There is no table service. You can order at the bar or if it is busy you order at the cash register near the entrance (although there is an entrance in the back as well from a small parking lot). 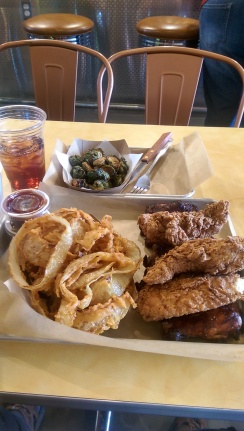 My first visit was right after it opened, so the menu was a little more limited than it is now. I couldn’t decide if I wanted wings or tenders, so I ordered both in the WingN Tender combo, which comes with 1 lb of wings, 3 tenders, 2 sides and 2 sauces for $20. I ordered the New Cleveland Gold and Citrus BBQ sauces. Both sauces were great, but I preferred the New Cleveland Gold. The wings were a little saltier than I expected, but they were absolutely delicious. I enjoyed the seasoning they use. The wings do not come coated in sauce, nor do they need to be. In fact, the menu specifies 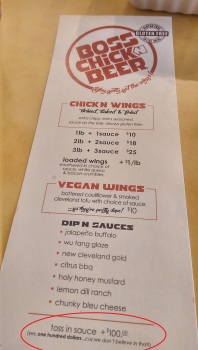 they can coat the wings in sauce for $100. The chicken tenders were perfectly fried, very tender – no pun intended – and quite juicy. I ordered the onion rings and fried brussels sprouts as sides. The onion rings were massive. They were thinly sliced, which I didn’t think was possible. The flavor was completely on point. The brussels sprouts were an absolute delight. They were roasted to within an inch of their life and absolutely delicious. I also ordered a Platform beer, because beer just goes well with wings. It was a lot of food and I enjoyed it the next day (hint: use an air fryer to reheat it and your leftovers will be perfect).

My friends got the wings and the vegan wings (battered cauliflower & smoked tofu). The vegan wings weren’t bad. I imagine if I were a vegetarian I would come order this quite often. One of my friends ordered the salt roasted sweet potato as her side. It was massive and very tasty. They also got a sample taste of the queso mac n cheese, which was delicious. I brought date nut cupcakes from Dick’s Bakery down the street for dessert, because you can’t beat the date nut cake. 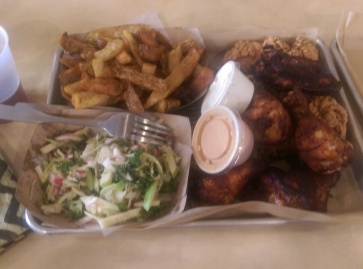 On my second visit I met a friend in the dog days of summer. The place was packed, and there was a line to order. I held our table while she ordered a WingN Tender combo for the two of us (it was perfect for two people). I let her choose the sides, and she chose the hand-cut fries and superfood slaw. I once again thoroughly enjoyed the wings and tenders. I can’t decide which I prefer, because they are both good in their own way. The handcut fries were perfectly fried, and the superfood slaw was delightfully fresh with lots of small julienned superfood veggies. I don’t know if I would have ordered the slaw, but it was a nice healthy choice. 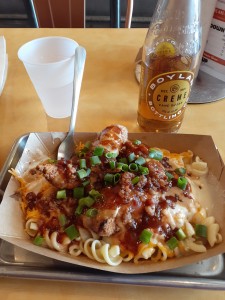 The latest version of the menu features Boss-Tastic Mac with the mac n cheese topped with chicken tenders, gold sauce, boss sauce, green onion and bacon. The Veggie Mac is topped with the vegan wings instead of the chicken and bacon. Holy hell is it good. The queso has a bit of a kick to it, but you can lessen the spice by getting a bite with some barbecue sauce as well. The curly macaroni noodles are a great vehicle delivery for the soupy cheese.

Chick, the Jersey Shore Chick and the Vegan Shore Chick – for $10. The Hott Chick and Hott Vegan Chick features their jalapeno buffalo sauce and jalapeno pickles over tenders or vegan wings, while the Jersey Shore and Vegan Shore uses peppers, mozzarella, tomatoes and marinara sauce. You can choose between a gluten-free pretzel bun or a tortilla wrap. They had a sandwich featuring a glazed donut, but surprisingly that didn’t go over that well and was taken off the menu.

Murder Mystery dinner at the Elks
And a pizza for dinner. It's really good pizza!
Follow Cleveland Rocks, Cleveland Eats on WordPress.com