We’re in week two of 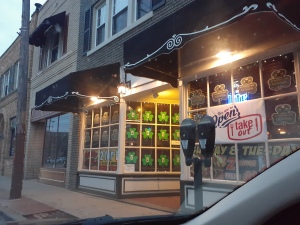 #stayathome. Two weeks ago all the church fish fries were cancelled until further notice because we were told to avoid crowds of 100. And then some self-entitled nimrods partied on the beaches of Florida anyway and who knows how many people were infected. So the government had to ratchet it up a notch (since people weren’t giving it the attention 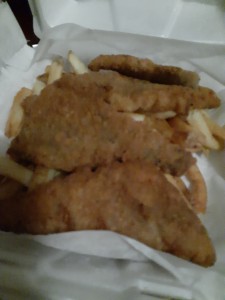 and concern this pandemic should be given) and close down all restaurants and bars. But luckily restaurants can still operate as carry out operations for the near future. Who knows how long that will last, but I took my chances and drove to Around the Corner in Lakewood to grab a fish fry to go. Practicing self distancing the whole time. There weren’t a lot of people getting to go orders at 7, and the employee cashed me out with the bar in between us.

I apologize for the quality of the photos. The lighting in my kitchen is not great, and I tried to avoid shadows as much as I could. I was unsuccessful.

I ordered a perch dinner because all my friends seem to prefer it. This perch dinner was good, but again it didn’t wow me. I guess I’m not much of a foodie, because I prefer to sink my teeth into a nice thick, fluffy white fish. I should have ordered the cod. It looks like a beautiful piece of fish and takes up the entire plate in the photos. The perch dinner features 4 pieces of lake perch, french fries, a small serving of cole slaw, and a corn muffin (yeah, dinner roll in this case – maybe they had run out) with honey butter for $13.95. 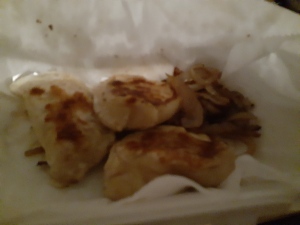 Since it was take-out I can’t rate the freshness. The perch and fries were a little soggy from being in the takeout container, but the second half heated up nicely the next day in the air fryer. I really enjoyed the cole slaw. It definitely ranks up there with my favorite cole slaws. It is mayo-based with just a hint

of sweetness. The dinner roll was meh, but the honey butter was delicious and definitely made it better. The pierogi seemed homemade. The potato and cheese filling was nicely seasoned and the outside was not overly doughy.

The only thing I wasn’t a fan of was the clam chowder. It looks denser in the picture than it was once I rewarmed it. So the consistency was fine. It was the taste. I don’t know if they added twice the pepper or if that is the normal recipe. If that was the normal recipe they might want to dial it back a bit on the pepper. It had a nice amount of clams and

potatoes. I still ate it, but a cup would have been more welcome.

Who knows what adventure awaits us next week. I had the Donauschwaben fish fry scheduled because I had a teacher meeting scheduled there that night, but we have now moved all school-related stuff online – even teacher meetings. I may or may not get it to go. It depends on if they are still serving. I definitely miss the pancake breakfasts!