Nancy from Fun Playing With Food highly recommended the fish fry at Fisher’s American Tavern, so that was my choice last week. I thought I had posted it, but apparently not. I called ahead and was told it would be about 30 minutes, which was perfect for me since it would take that long to drive there. I pulled in and there were a few cars in the lot waiting for their food. Calling ahead was a great idea. I walked in under the awning and picked it up at the bar. They had forgotten to give me my bags with salad and chowder, but a quick call and u-turn fixed it.

I decided I was going to add a couple sides, so I only ordered the 1/2 Annie’s Fish Fry. I was told that it was one piece of fish instead of two, about 7 oz. total. It still came with a ginormous piece of delicious, flaky fish, a healthy portion of fries, a dinner roll and tartar sauce. I also ordered a side of pierogi and a bowl of chowder. When asked if I wanted sour cream or apple sauce I answered affirmative to both. I’ve been craving apple sauce lately. I split them up into two meals. I can’t imagine how much I would have had left if I had ordered the full fry.

My air fryer came in handy, because I had to stop at Fresh Fork to pick up a winter share. They were nice enough to let non-current customers order due to the coronavirus. I took advantage of stocking up on milk and eggs and looked forward to the roast chicken later in the week. People were heavily distancing themselves (instead of 6 feet more like 100-200 feet) and the line wrapped around the edge of the parking lot. By the time I came home my fries and fish were soggy. I popped half of them in the air fryer for about 8 minutes at 380, and they crisped up nicely. In fact, I would have to say that the fries were my favorite all season.

Nicely seasoned. And the fish had a nice crisp coating but it wasn’t too thick. Overall a very nice fish fry.

The pierogi were great and easy to heat back up. The onions were nicely caramelized. It was just potato and cheese, but those are the best ones and these were a really nice example of good pierogi. I slathered them with sour cream, because that’s how I roll. The chowder was okay. Better than Around the Corner, but nowhere near Sokolowski’s or Firehouse Grill’s chowder. I ended up eating half with the meal and then the other half 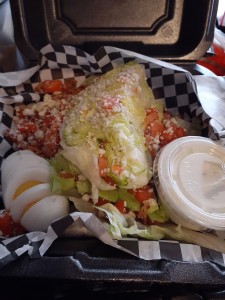 later that night as a “snack. They added it to my entree for $2.99 instead of charging me the full price of $5.49, so that was a nice surprise.

I also ordered a Wedge Salad, because I love them. The bleu cheese doesn’t love me, but I figured I would indulge since I was self-isolating. I was so glad I did. The lettuce was crisp, and I loved the toppings of finely diced tomato, crisp bacon pieces, and bleu cheese hunks. The sliced egg was a nice choice as well. It even held up until I had the second half at lunch the next day.

This was definitely a fish fry worth visiting. Thanks for the heads up, Nancy!