I had never heard of Congin’s until I attended a Bordeaux wine dinner by myself at Le Petit Triangle. I was sat at a larger table of strangers, and we were trading favorite food tips (as foodies tend to do). One of the women, who I recognized as a writer for the Cleveland Heights Observer, recommended the pizza at Congin’s. Congin’s Pizza is a family-owned restaurant that has been in business for over 27 years. Apparently there are two locations – Congin’s

Pizza in Chardon and Congin’s Italian in Cleveland on Nottingham Road & St. Clair near the Euclid/South Collinwood border). I drove past the Nottingham location, and it took me a second to recognize it. It looks like an unassuming auto body repair shop. One Yelper describes it as “a very unassuming, bare bones building lacking in even a modicum of charm.” I made a point to stop for a pizza (making the mistake of not calling it in – I sat and waited in the austere waiting area for a while). It was worth the wait, and I’ve been frequenting Congin’s Italian ever since. It is a quick drive from Cleveland Heights once I learned the back roads, and it serves what I think is the best old-school, American-style pizza in Cleveland. The crust is 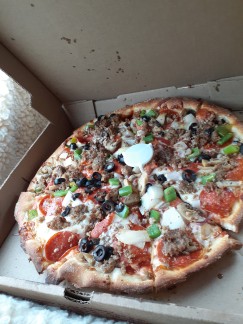 delicious, the red sauce is not too sweet and not too acidic, and they are generous with the toppings. I especially like the generous clumps of sausage. I am hooked. In fact, I was driving for Lyft on Valentine’s Day and decided to call it a night when I was near Bedford. I called in a pizza order to Congin’s and drove all the way there to get my pie just before they closed at 10 pm. Driving 271 to 90, I got off at E. 185th, and it was a quick trip until I was there on Nottingham. They have a drive-thru window if you’re lazy and don’t want to get out of car. I can’t usually wait until I get home and dig into the pizza as soon as I can. The melty cheese stretch brings so much satisfaction, and I rush to get the slice in my mouth before the warm

toppings slide off. I’ve gotten pretty good at holding it so it all stays together. I order the same pizza every time – the Deluxe, which features pepperoni, sausage, mushroom, green pepper, black olive, and onion. I think about switching it up every once in a while, but why mess with perfection.

I’ve also tried several other things off the menu. I ordered the Congin’s sub on my second visit, because ordering the sub named for the restaurant seemed like a no-brainer. I enjoyed the sub a lot. The Congin features turkey, ham, roast beef, cheese, lettuce, tomato, mustard, & Miracle Whip. Even though I prefer mayonnaise 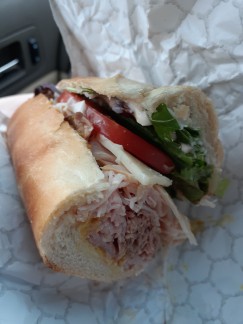 I didn’t hate the Miracle Whip. I think it gave it a more unique flavor. The tomato was surprisingly fresh and perfect for a tomato in January. It was a nice surprise. I loved the fact that the lettuce they used was a spring mix featuring arugula. They have a meatball sub, Italian sausage sub, chicken and eggplant parmagiana subs, and hot buttered steak sub that sound good – as well as something called a Bundo Burger, which is apparently very similar to a Romanburger. Ah, Cleveland, never change!

Their pasta dinners come with a dinner salad and a bread roll. You can order a half order, but it doesn’t come with the salad or roll. I ordered the spaghetti with meat sauce my first time around. I always order spaghetti at a new place, but have learned not to order meatballs because I tend to be disappointed. The spaghetti was good and the meat sauce was quite generous. I will be trying other pastas off the menu in the future.

The wings were weird. People raved about them on Yelp. I was not expecting to receive breaded wings with the sauce on the side. They were large, meaty wings, but I prefer unbreaded wings. Breading makes the sauce soak in and is just unnecessary in my opinion.

Taking advantage of the last of the garden tomatoes
A sugar cone of custard was the perfect finish.
Follow Cleveland Rocks, Cleveland Eats on WordPress.com